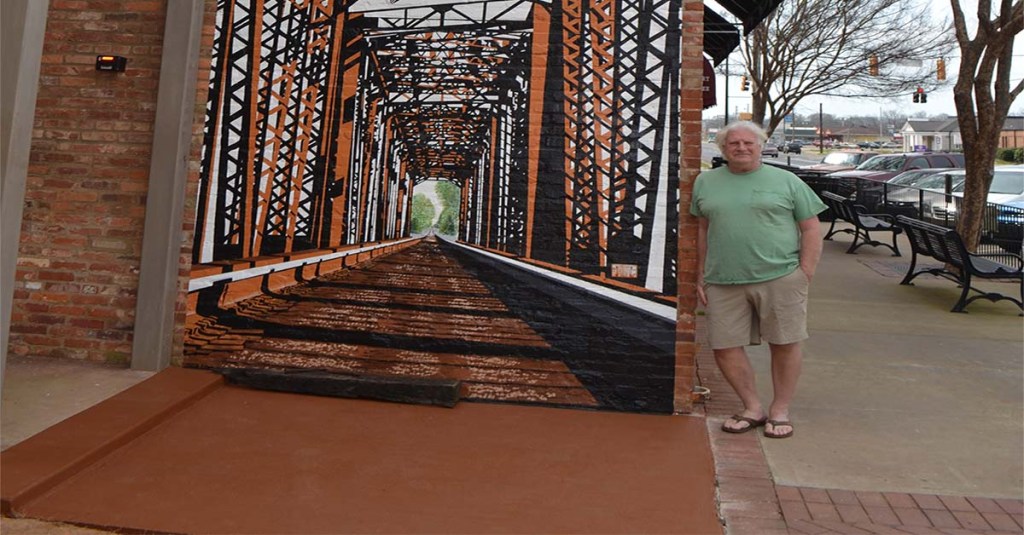 WEST POINT — One of West Point’s best-known landmarks, the five-span CSX railroad trestle crossing the Chattahoochee River, is the subject of a seven-foot-wide by 20-foot-tall mural on a downtown building. It’s on the left-front side of Johnny’s Pizza, and it’s grabbing attention.

Many photos have been taken of the mural, and people have had their picture made standing next to it. It’s become something of an attraction in the downtown area.

He had the help of art teachers Teresa Davidson, Thea McElvy and Tawana Henson.

“It was a big project, and it wouldn’t have come out like it did without their help,” Frank said. “It’s close to a 1:1 ratio. The mural is almost as tall as the trestle.”

The truss-style structure was built by the Virginia Bridge Company in 1914.

The mural was modeled after a photo Frank took near the west side entrance of the trestle looking east.

Friends are already kidding Frank that his artwork looks like something Wile E. Coyote would create to trap Roadrunner into running full-speed into the side of a steep cliff.

“I see where they are coming from in making that comparison and actually it’s something of a compliment,” Frank said. “The way that works out is that Wile E. Coyote goes down to the Acme Paint Store and gets everything he needs to paint a tunnel on the side of a steep cliff. It’s amazing how he can throw all the paint up there, and it turns out so beautiful.”

Frank has painted lots of storefront signs in downtown West Point and the surrounding area. When Johnny’s Pizza owner Ben Hamilton contacted him about a job, he thought it might have something to do with that. When he went to talk to him, he found out that Hamilton wanted him to paint a mural in the back room.

He looked at it, but it just wasn’t feasible. While there, Frank took a photo of the side of the building with his smartphone. He would later photoshop his trestle photo onto the building photo and it fit perfectly.

Frank said it’s amazing to see the workmanship in the trestle when one takes a close look at it.

“The engineers must have gone crazy trying to figure it out,” he said. “It has so many bolts, washers and rivets in it.”

In a previous mural project at Pure Life Studio in LaGrange, Frank had to do much of the detail work of a guitar propped up next to a tree from a ladder. With the Johnny’s Pizza project, he was able to paint from a scissors lift.

“It was really encouraging when people would come by while I was painting it and say ‘Wow!’” Frank said. “ I’m hoping it won’t fade. Since it’s in the shade, there are no direct UV rays on it.”

Frank said the trestle mural is the most fun project he’s ever been part of. He’s grateful he took that photo looking east on the bridge. “

We couldn’t have done it without that photograph,” he said. “Because we did it from a photo, it took on the details of that image.”

It took seven gallons of white paint to have a background for the trestle. It involved lots of detail work. It was easy to paint the bricks, but the mortar was not so easy.

“We had to fill in a lot of holes with white paint,” Frank said. “Some orange-tinted paint gives the trestle it’s rusty look.

The tough part was matching it as closely as they could with what was on the photograph.

“We used basic black and grays for the shadows,” Frank said. “We used brown and beige for the cross ties.”

The bulk of the painting was done in those three colors. The one exception is the 11-inch by 14-inch section on the east side of the trestle.

“Tawana painted the trees and the gravel on the opposite side,” Frank said. “She did a great job and did it so fast. It was amazing to watch her work. I recorded it on my phone. Oddly enough, a train was passing at the time. You can hear the horns blowing, the crossing gates ringing and the rumble of the train passing by.”

“If you look closely, you can see that Tawana put in a couple of Christmas trees on the other side,” Frank said. “I like that.”

Hamilton said he will put up a plaque on the building front near the mural. It will list the names of the contributing artists.

A detail in the mural some people don’t notice is that the sidewalk in front of the tall mural is painted brown. That blends in with the cross tie look.

“It’s so different from other murals I have seen,” Frank said. “Everyone tells me they like it, and that makes me feel good. Prom season is approaching, and I think this will make a great backdrop for prom season photos. I want people to enjoy seeing it and taking pictures of it. It’s such an iconic part of the town. When you think of West Point, you think of the Chattahoochee River flowing through it, the river bridge and especially that old railroad trestle. I would love to do other similar projects.”

Frank has been into photography since he got his first camera at age 19 in 1973. He has around 30 cameras now. “Photography is my first love,” he said.