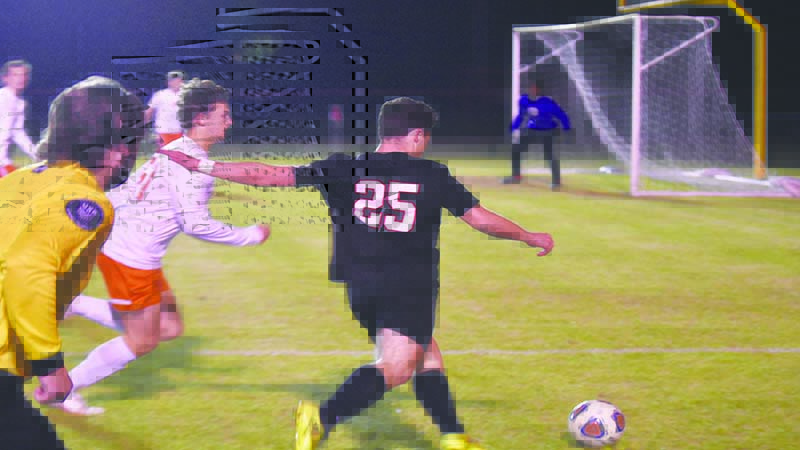 Springwood senior Kannon Key breaks away from the Glenwood defense. Tuesday was the team’s first loss since 2019.

“We were working hard, but we just couldn’t get any balls through. Their back line was fantastic tonight,” head coach John Lanier said. “We were just struggling getting shots off on them and making runs. Hats off to them, they played a fantastic game. They played well, they got the win and we get them one more time. We have to get ready for Tuesday when we play them again.”

For most of this season, the Wildcats have been able to dominate teams offensively, as their forwards Kannon Key and Tyrese Ferguson have been able to take on a couple of defenders at a time, find space and score goals. On Tuesday, Glenwood’s defense wasn’t allowing the seniors to break past the line and force their way inside the box for scoring opportunities.

“That’s something we mentioned at half. If we were going to score, we weren’t going to be able to take two or three guys on and beat them,” Lanier said. “They were going to have to work together and pass the ball around to find the open guy. We were trying to do that, but it didn’t materialize today.”

The teams were tied at the half, but Glenwood took the game’s lead with 30:18 left in the second half. The Gators packed the box and got several shots off to find the back of the net for the goal.

“This is a new team. We had a lot of seniors from last year that aren’t here this year,” Lanier said. “Guys are still learning to take that leadership. This was a good game for them to see. We have a lot of guys that are stepping up, but a lot of our guys haven’t been in this position. They’ve had seniors from last year to depend on. Kannon and Tyrese have really stepped up as leaders this year, but there’s a lot of new guys out here. We’re getting better and we’ll be ready for the next one.”

Glenwood scored its second goal about 10 minutes later as they scored on a penalty kick.

For most of the second half, Glenwood controlled the ball, allowing the Wildcats to only have a couple of possessions that resulted in a shot.