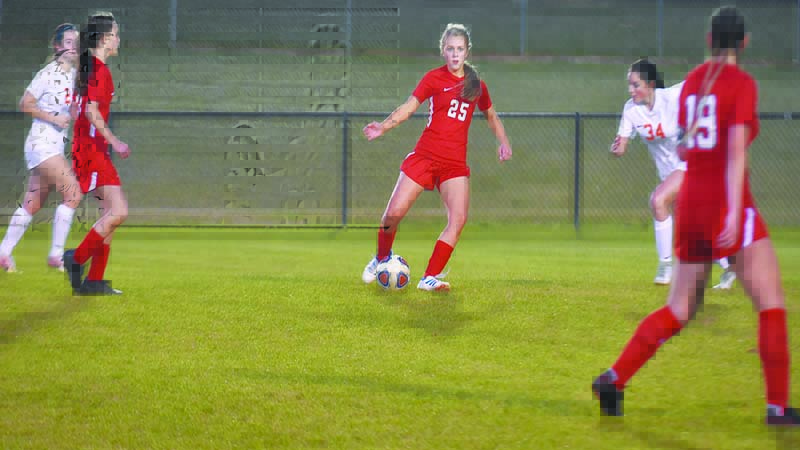 Springwood freshman Charlie Key catches the ball and looks for an open teammate against Glenwood. Key finished with a goal in the tie.

After it lost to Lee-Scott to start the year,  the Springwood girls soccer team started to get on a roll. It won the program’s first game, defeating Fort Dale before taking down Morgan Academy in its next game. It showed its improvement against area opponent Glenwood on Tuesday, as Springwood tied Glenwood 2-2.

“I’m really proud of the girls and the way they fought tonight,” head coach John Lanier said. “That’s a fantastic team with great coaching. It’s just another step for us. We got two wins and a point towards the playoffs. We’re going to keep building and keep going.”

Early in the first half, Springwood was getting plenty of opportunities to score as freshman Charlie Key, junior Madison Reeves and senior Amber Franklin were pushing the ball up the field. Springwood struck first with 31 minutes left in the first half. Reeves was credited with the goal.

For most of the second half, Springwood continued to push the ball down the pitch, but it couldn’t convert most of its shots. That changed when Key broke through and scored with 16:26 left in the game.

“She’s a great player and leader for the team,” Lanier said of Key. “Confidence wise, to be able to get those in the back of the net, it really helps the other girls, who are getting opportunities to shoot as well. It’s huge for everyone.”

The Wildcats looked like they had the game won, as junior Ashlea Fuller was making big stops, sometimes making several saves at a time, but with 3:21 left in the game, the Gators found the back of the net tying the game at two.

For the remaining three minutes, Glenwood continued to force their way into the Springwood box but came up short.