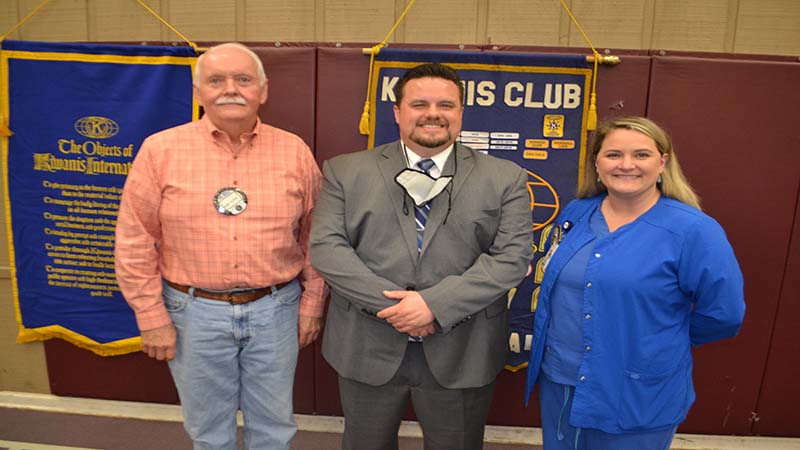 Chambers County Probate Judge Paul Story (at center) was the guest speaker at Wednesday’s noon-hour meeting of the Kiwanis Club of Valley.

VALLEY — Approximately three-fourths of the tags and titles sold every year in Chambers County take place in the Courthouse Annex in Lanett. That’s significantly more than the sales that are taking place at the courthouse in LaFayette.

Probate Judge Paul Story talked about this at Wednesday’s noon-hour meeting of the Kiwanis Club of Valley, where he was the guest speaker.

Tag and title sales take place in both locations as a convenience to county residents.

Story said the larger number of sales in the annex is due to the county’s population being concentrated on the eastern end of the county in the Valley/Lanett area.

Because of this, Story said he’s looking at providing more services in Lanett.

“Something new we are doing is having some hearings on the second floor of the courthouse annex,” he said. “It’s for the convenience of the citizens, and we are doing it one day a week. We may expand to two days a week if we need to. This week will be the fourth Thursday we have done this. We have at least four to five cases every week, and it keeps the Valley area people from having to drive to LaFayette.”

Story said that he’s very careful to stick to procedure in everything he does in his role as probate judge.

“I’m not doing anything that could be considered practicing law,” he said.

Story said that business activity slowed down significantly in 2020 due to the COVID-19 pandemic. Much of the tag and title service was online last year. It’s getting more back to normal this year. Tags and title sales make up a big part of what the office of the probate judge does every year.

One of the more pleasant duties he has involves adoptions. It’s almost always a situation where everybody is happy about it, and the end result is a larger, happier family.

A really tough chore involves mental cases. Largely because of business closings and job losses due to the pandemic, there was an increase last year in hospitalizations due to mental-related issues.

“Almost everyone was impacted by Covid in some way,” Story said. “Some people fall through the cracks, and it’s sad. Sometimes we have to take action to take care of them. Prayer is something much needed in such situations.”

Story said he had seen an increase in car purchases in the last year.

“The stimulus checks may be a factor in this,” he said.

A member of the club asked Story if trailers used to haul lawn mowers, golf carts and four-wheelers need to have tags.

“Yes,” he said. “They are supposed to have a tag for a utility trailer,” he said.

Story said there are issues affecting probate offices in Alabama that the state legislature needs to act on. He said there was a problem with stolen boats showing up in Alabama and that inadequate licensing or enforcement had to play a factor. Another problem involves marriage license requests from out-of-state residents.

“It’s too easy to file for marriage licenses in Alabama,” Story said. “I get several of these requests, some from as far away as Hawaii, every week.”

“Thank you for inviting me to come here and speak to you today,” he said. “I enjoy talking to people about the resources available to the public from our office.”

He also thanked everyone for the many expressions of sympathy his family had received on the recent passing of his father, Charles Story, who had served Chambers County for close to 20 years as the circuit clerk.