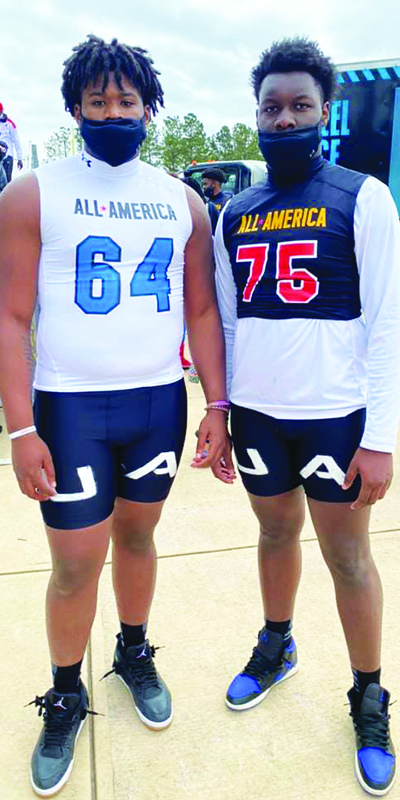 Two Chambers County standouts had a chance to test their abilities against the best high school football athletes in the country on Sunday, as Lanett’s Caden Story and LaFayette’s Antavious Woody participated in one of the six Under Armour All-American camps.

“It was a great experience,” Story said. “It was very fun to compete with the best of the best. It was invite-only, so you knew that everyone there was going to give it their all and try to get invited to the [Under Armour All-American] game. Everyone was competing to the best of their ability.”

The Under Armour camp was Woody’s first camp. On Sunday, he learned how to compete more, as the 6-foot-4 lineman has usually been bigger and stronger than most of his competition in high school.

Story has been to a couple of different camps so far in his high school career, but at Sunday’s camp, he had a chance to have some one-on-one instruction with a coach.

“The biggest thing I learned was how to use my hand. There’s more to being a pass rusher,” Story said. “You can always do different things to get an offensive lineman off balance. There were different things like that I didn’t know, and I’m glad they taught me before I got to the next level.”

Story is currently ranked as a four-star prospect by all major recruiting websites. In early December, Story was named an All-American by Tom Lemming, one of the most prestigious recruiting analysts in the country.

The 6-foot-5 defensive end was named the 2A Lineman of the Year by the Alabama Sports Writers Association this past season.

As the No. 10 player in the state and No. 9 weakside defensive end in the country, Story has picked up more than a dozen offers from Division 1 teams, including Texas A&M, Auburn, UCF, Indiana and Mississippi State. He plans to take four official visits in June.

Though the process has been extremely different, Story has already seen the full recruitment process, as both his brothers went through it. Tre Story signed with Richmond in his senior year, while Kristian Story signed with Alabama.

“They tell me what to look for when I’m looking at schools,” Caden said. “They tell me to look at details, not just look at the coach, because you never know what could happen to that coach.”

Story plans to commit on Aug. 1.

“The recruiting process has been great, but it’s also been hard and stressful,” Story said. “I’m enjoying it. This is what I’ve dreamt of.”

Woody is a three-star offensive tackle but has also drawn interest defensive end. So far, Woody has 11 total offers, including Georgia, Auburn, Mississippi State, Ole Miss and Florida State. His first offer was from Florida State, which he received on Nov. 2.

“It’s been good. I knew they would kind of start rolling in [after the Florida State offer],” Woody said. “Coach [Juan] Williams told me to just stay patient. I listened to him and things are going great so far.”

At the Under Armour Camp, Woody played center, a position that he had never played before.

“I had to block the No. 2 dude in the country [Walter Nolan a five-star defensive tackle],” Woody said. “There was nothing to do, just work hard. It was a little weird, but I had to do it. I can’t tell a coach no.”