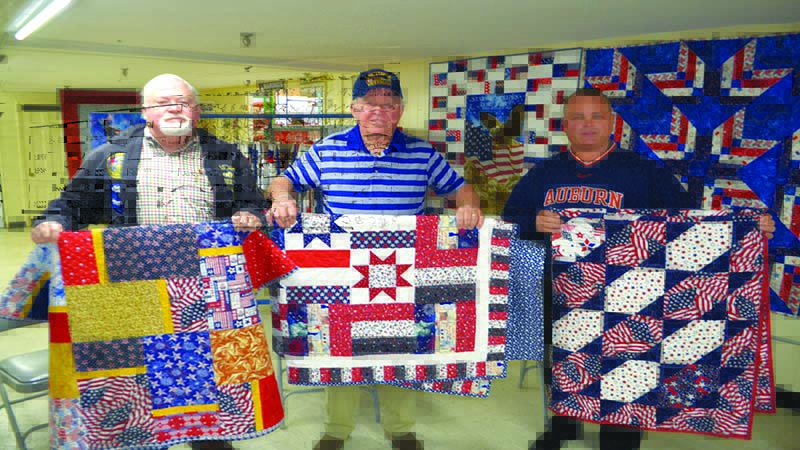 Three veterans were honored at a Quilt of Valor ceremony Saturday morning at sewingmachine.com in downtown West Point. From left, are Navy veteran Steve Scott of Columbus, Army veteran Tug Livingston of West Point and Marine veteran Micah Curtsinger of Auburn. It was the Georgia-Alabama Chapter of the Quilts of Valor’s first quilt presentations in a year. There had been no such presentations in recent months due to Covid-19. The local quilting group has remained busy making quilts over the past year, and has a total of 47 of them to present to a local veteran or someone on active duty military service.

WEST POINT — For the first time since March 2020, the Georgia-Alabama State Line Chapter of the Quilts of Valor hosted quilt presentations this past Saturday at sewingmachine.com in downtown West Point. The program honors veterans from the two-state area who served in a branch of service such as the U.S. Army, the Navy, Air Force, Marines and Coast Guard. Many of the men and women who have been recognized in recent years are veterans of World War II, the Korean War, the Vietnam War and the Afghanistan/Iraq wars.

The presentations were halted for a year due to the COVID-19 pandemic, which has killed over 500,000 Americans since last March.

There has been much sorrow and worry over the past year due to the pandemic, but on Saturday there were lots of smiles on the faces of the quilt recipients and family members. It’s a hopeful sign that things are getting back to normal.

In a 28-year career with the Navy, Scott was on active duty for five years. He said that he has both good and bad memories from his military service.

“I wouldn’t trade it for the world,” he said. “I traveled to 66 different countries. My best year was 1990 when I served in the Sealift Command at the U.S. Navy yard.”

Like many of the service members who served in Vietnam, Scott had some exposure to Agent Orange and has had some health problems due to that.

Tug Livingston became emotional when he talked about what he went through in the two years he was in Vietnam. “We lost too many good men in that war,” he said. “Too many bodies were taken away, and it shouldn’t have been like that.”

Livingston said he would never forget leaving Atlanta on a plane bound for Vietnam, looking through a porthole as the plane was leaving the ground and wondering if he would ever see his beloved Georgia again.

“My wife was six months pregnant when I left,” he said. “My daughter Michelle was 13 months old when I first saw her. We recently lost her to brain cancer.”

“Veterans have sacrificed so much for that flag,” he said. “I think everyone should defend our country in some way. When we were in Vietnam, everyone had the same goal – to get back home alive. I love my country, and I love my family. I appreciate some of them being here with me today.”

Quilts of Valor spokesperson Shelia Simpson thanked both Scott and Livingston for answering the call of duty and serving in Vietnam.

“We should apologize to men like you every chance we get for the way you were treated when you returned home,” she said. “Thank you for what you did. You served our country well.”

Curtsinger served in the U.S. Marine Corps from 1994-2015. He’s now a commercial pilot flying for Delta. He said that being in the Marines had been a good experience for him. He flew Harrier jets for 21 years. Those planes are famous for being capable of taking off vertically or from very short runways.

“The type of ground combat we saw in Iraq was very different from what had taken place in Vietnam,” he said. “It was an honor to serve my country. There is an energy and spirit among those who are on active duty. That makes everyone’s job a little easier.”

Curtsinger said he had the opportunity to be at Pearl Harbor for the 75th anniversary ceremony on December 7, 2016. The Japanese attack of the U.S. Naval base claimed 2,403 American lives and wounded 1,178 more.

He said that it had been a very moving experience for him to be there that day.

While there weren’t any quilt presentations during the past year, the quilters have remained very busy making the quilts.

“We have made 47 of them,” Simpson said. “Our top priority is to award them to World War II veterans if we can find them.”

Members of the Georgia-Alabama State Line chapter meet at sewingmachine.com from 8 a.m. until 1 p.m. EST 0n the first Saturday of each month. They include Anglea Maddux, the president; Sunny Pedigo, Teresa Bookwalter, Linda Jones, and Hetty Mapp. Most of them have family connections to military service and are proud of what their dad, husband or other family member did.

“Doing this is our way of giving back to our country, and the brave men and women who have served it,” Simpson said. “We welcome anyone’s help. If you have a knack for sewing, come and talk to us. If you can donate fabric or sewing supplies, that will help us, too.”

Quilts of Valor is a national, not-for-profit organization founded by Catherine Roberts in 2003. Her son was serving in the Afghanistan War at the time, and she had some bad dreams of him struggling with his war demons. In one of those dreams, she saw him finding comfort from a quilt from home. She made him one, sent it to him and thought it to be a good idea to do that for all active duty personnel and veterans. She organized a quilting group, and their first quilt was presented to a wounded soldier at Walter Reed Hospital in Washington, D.C. It took her group several years to award their first 100 quilts, but as word spread about what they were doing, quilting chapters were formed all over the U.S. By May 2014, the number of awarded quilts hit the 100,000 mark. It now stands at just under 270,000.

“That’s a lot of quilts,” Simpson said, “but when you think about all the active duty personnel we have and all our veterans, there’s a lot more work we need to do.”