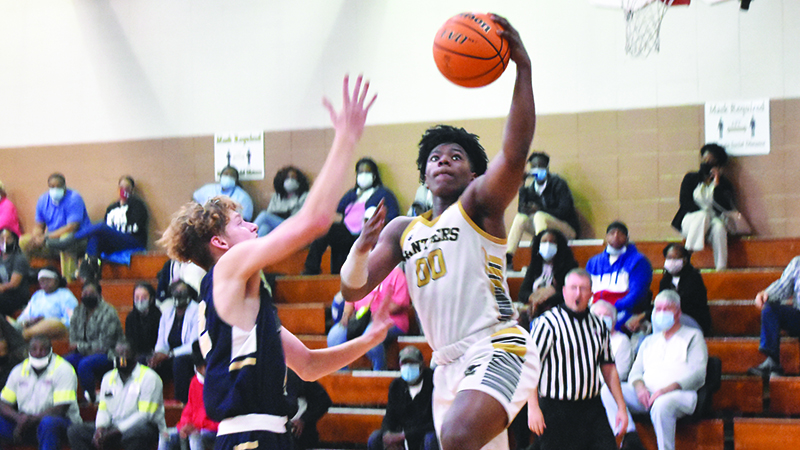 He was already one of the best players in the area but after the Lanett boys basketball team lost in the state championship game to Pickens County, Kintavious Dozier was already working to improve his game.

As a junior, Dozier was a dominant force, scoring 26 points a game while adding five assists and four rebounds, but there were some areas in his game that he needed to improve.

One of those areas was leadership.

Last season, Dozier was a new face at Lanett, transferring in from Valley High School, joining a team that started four seniors for most of the year. He didn’t need to be a vocal leader on a team that had players full of championship pedigree, but after the championship loss, Dozier knew he was going to have to step up during his senior season.

“It came a lot from that game we lost in the championship,” Dozier said. “You don’t want to get that far and lose. I’m just making sure that we don’t lose because of a little mistake or anything like that. I’m making sure that our guys stay happy, positive and no matter what happens stick together. If we can do that, the championship will be in our hands.”

Dozier is one of the few basketball players that aren’t on the Panthers football team. Since he was strictly basketball, Dozier refined his skills, while working to get bigger and stronger before a grueling senior campaign.

“A lot of working out. During their football season, five days a week, sometimes six. Two or three workouts a day,” Dozier said. “After I would leave Lanett High School, I would go to LaGrange to work out. It’s just a lot of hard work. I work outside of my coaches too. I just have always had that work ethic.”

“I’ve seen him grow on the defensive end,” head coach Tay McCants said. “When he first came in, Dozier didn’t really play any defense. I thought he was weak in it, but he was just so offensive-minded. This year, he’s shown that he can play anything, whether it is man-to-man, zone or press, he wants to get after it. I think he wanted to be able to prove that he could play defense to everybody.”

That work ethic and work in the offseason paid off and it showed right away. In Lanett’s first game of the season, the Panthers defeated Troup in overtime. Dozier finished with 30 points.

“Me not being a 6-foot-5 guard, being from a small town like this, they probably think I can’t do anything big,” Dozier said. “Plus, it’s the love and passion I have for the game. My family and coaches push me, my teammates push me. I have a great support system. That encourages me to keep on going, and I’ll always find a way.”

For how good he was a year ago, Dozier has surpassed all expectations this year. Through 22 games, Dozer is averaging 31 points, six assists and six rebounds.

In Lanett’s win against Geneva County, Dozier was the team’s offensive catalyst, especially in the second half. He finished with 27 of the team’s 62 points, adding five assists, six rebounds and five steals.

“It just shows that whenever we need something, he can make it happen,” McCants said. “The guys look for him, and they look for him in big games like Geneva County. With Dozier wanting the ball in his hands and trying to make stuff happen, it makes it a lot easier for the other four guys on the court.”

Dozier also showcased his ball-handling ability in the win. Once Lanett slowed the pace of the game down in the fourth quarter, the ball rarely left Dozier’s hands, as he was able to navigate around the Geneva County defenders along the perimeter without losing the ball or allowing a five-second violation to be called.

“He always takes a couple of minutes to work on his ball-handling, and it got contagious too,” McCants said. “In practice, I make him stay in all the drills. He doesn’t get many breaks because he doesn’t get many breaks in the game. I think that kind of helped him with his conditioning. He’s one of the fastest kids I know, and you can’t take the ball from him. He’s just doing a great job. He can score at any time, but keeping those ball-handling skills sharp that’s been great for him and great for us.”