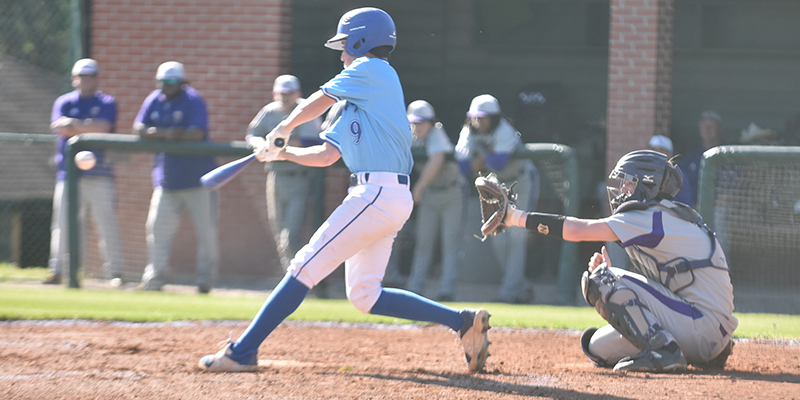 Trailing by two runs in the bottom of the seventh, the Valley baseball team had a chance to walk off Tallassee.

Valley put two of its first three runners on base to start the inning, as Bentley Green drew a walk and Cullen Kennedy singled to left field. But the top of the order couldn’t get the job done, as Valley popped out to left field on back-to-back batters to end the game 16-14.

“The bottom of our order was taking until they got a strike, and we told the top of the order we’re free-swinging. We’re not going to try to handcuff the top of the order,” head coach Patrick Shivers said. “We wanted our bottom-of-the-order guys to take because that pitcher was wild when he first came in. We thought if they could get down in the count and put pressure on the pitcher, maybe we could get some guys on. We felt good with two of the first three batters getting on and getting us to the top. Jackson [Sanders] put a good swing on it, just got under it a little bit. I think we were thinking with our one, two and three hitters, every one of those guys are capable of hitting the ball out of the ballpark. Maybe we were trying to do too much, but I’m okay with guys going up there and being aggressive and trying to barrel up pitches.”

Tallassee started the game with a five-run first inning, as two errors and a sacrifice fly scored all five runs in the inning.

“Today, our pitchers let us down a little bit. We weren’t as consistent in the zone as we’ve been. Our walks were up and anytime you put guys on without making them earn their way on, bad things are going to find a way to happen to you,” Shivers said. “We put guys on and we had opportunities to get out of the innings. The ball just got away from us. We just didn’t make those plays.”

Though they were down, the Rams didn’t stop playing. They started to chip away starting in the bottom of the second.

A walk and an error put two Rams on base to start the second inning. Ryan Valencia scored the first Valley run of the game stealing third and scoring on an error by the Tallassee third baseman. A sacrifice fly from Sanders scored the second run of the inning.

Valley cut the deficit to just two runs in the bottom of the third inning, scoring four runs in the frame. With two runners on base, Ashton Carter skied a ball to right field, scoring the first run of the inning. A Tallassee error scored the second run, while a Sanders triple added two more runs.

“When you get down five runs early in the first,  it kind of takes the life and wind out of a ball club. That’s what happened early. We got the wind taken out of us with uncharacteristic walks and uncharacteristic plays in the field,” Shivers said. “I was proud of the effort of the guys to battle back. I’ve had ball clubs in the past, when you get down five runs early, let alone eight, we could tuck our tails. This club didn’t do that. They had a little bit of grit about them and a little bit of competitiveness about them, and I was proud to see that.”

Valley allowed three runs in the fourth inning, once again due to a combination of errors and walks before scoring two in the bottom of the inning. Errors cost the Rams in the fifth, as Tallassee scored five in the top of the fifth.

In the bottom of the sixth, Valley loaded the bases with one out. Green knocked in a run on an infield single, followed by a Tallassee error that scored two runs. A single by Sanders knocked in the final run of the game.

“They’ve just gotten so much better,” Shivers said of the bottom of his lineup (Green and Kennedy). “From the beginning of the season, we’ve all gotten so much better, from our approaches at the plate. I guess it was all the time off,  with the slow start and all the rainouts. We said this ball club could be a good hitting ball club. I think we’re just now getting to be where we expected to be early on. Those guys at the bottom, Cullen and Bentley and Trevor Rudd, they’re battling.”

Valley is off for the remainder of spring break. It will resume play on April 6, when it travels to Russell County.