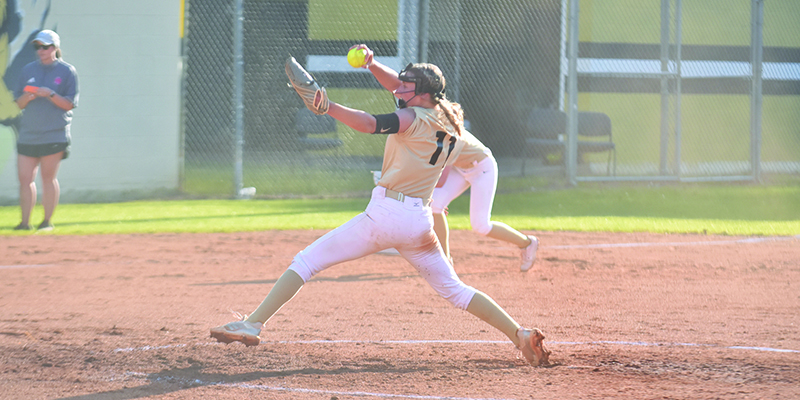 Since losing to Smiths Station on March 6, the Beulah softball team has been on a roll, winning nine of its last 10 games coming into Tuesday’s game against Horseshoe Bend.

Led by sophomore Brandy Phillips in the circle and at the plate, Beulah continued its hot streak, defeating Horseshoe Bend 5-1.

“I was proud of them. We put a lot of runs up last night. We had 11 runs against a really good Woodland team, so I figured we would be a little flat,” head coach Stan Pepper said. “We weren’t really flat, but we were trying some things offensively. We were trying some things that we hadn’t done in a while trying to get ready for the area game tomorrow. We’ve had to make some adjustments defensively because of a couple of issues that need to be corrected over the next couple of days. They’re adapting to whatever we need done. I’m pleased with that.”

Beulah did most of its damage in the first inning. Adriana Green and Savanna Clements led off the bottom of the first inning with singles. After two pitches to Phillips, the Bobcats led by three, as Phillips lined a pitch over the center-field wall for a three-run home run.

In the second, Phillips brought in Green from second with a single to right field, knocking in her fourth RBI of the game.

Beulah scored its final run in the third inning, scoring on a Katie Morris sacrifice fly to right field.

Horseshoe Bend scored its only run in the fourth inning, scoring on a ground out to the Bobcats’ shortstop.

Phillips, who went 4-for-4 with five RBIs against Woodlawn on Monday, went 3-for-4 with four RBIs.

“She hit the ball well last night. She hit a home run last night and she hit one tonight, so she’s hitting the ball solidly,” Pepper said.

Overall, four Bobcats finished with multiple hits, as Green finished 4-for-4, Clements finished 3-for-3 and freshman Elizabeth Hancock went 2-for-2.

“I was really pleased because we had about 12 days off [before Monday’s game],” Pepper said. “I told them to ‘get away, don’t even think about softball.’ Yesterday, we met for the first time and hit for the first time in 12 days, and I was pleasantly surprised that we have played well the last two games. I guess we needed some rest. Our girls, they were tired, I was tired. Everybody seems rejuvenated right now. I’m really pleased that the bats didn’t die over the break. If we keep that up, we’ll be okay.”

Phillips went the distance for the Bobcats, throwing just 73 pitches in seven innings. She allowed just one run off six hits while striking out six batters.

“She pitched well at times,” Pepper said. “She struggled with a couple of pitches, she’ll tell me what pitches she’s struggling with so I don’t call them again. I was pleased with her hitting and pitching. Katie has been in a groove, but we’re getting to the point where I don’t want to wear them out.”

Early in the season, the Bobcats played an extremely tough schedule, loading up against a lot of the powerhouse teams in the southern part of the state.

“So far it’s paid off. We’d like to have a few more wins versus those teams, but so far it’s paid off,” Pepper said. “It’s done what I hoped it would do, and that it’s prepared us for some stiff competition in the state and area play. We’re battle-tested. They know if we play the way we’re capable of playing that we have a chance versus anyone we play.”

Beulah is at home for the final area game of the season on Wednesday, as it hosts Reeltown.

“We’re where we want to be,” Peper said. “We have an opportunity to finish it out tomorrow night and finish 4-0 in the area and have a chance to host the area tournament, which was a goal to start the year. We’ve gotten better every game. We’re winning ball games in a lot of different ways. As long as we stay healthy, have fun and are hustling, we have a chance to win a lot more ball games.”