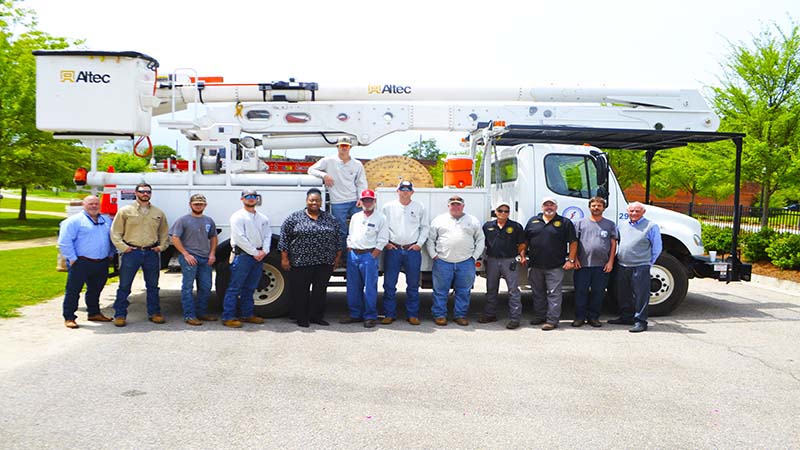 LANETT — People take for granted that electricity will always be there to help take care of their everyday needs, but this takes place only because linemen build and maintain a system that keeps our cities, counties, states and nation running. From the power plants, the grid crisscrossing the country both above and underground and right up to the meters on our homes, it’s linemen who make it all possible.

Sunday, April 18 was National Lineman Appreciation Day, meant to recognize and thank lineman for the work they do.

Regardless of the source, electricity has to be transported via power lines employing transformers and other equipment. Due to the dangerous conditions power poses, safety is of the utmost importance for both the lineman and the consumer. When storms bring down the power lines, it’s linemen who repair the damage as quickly as possible. They often work tirelessly to get the power flowing normally again. Even when there is no crisis, linemen work under dangerous conditions on a daily basis. Whether they are working in trenches, near water or high towers, the risks are extreme.

People can show appreciation by thanking a lineman in person or on social media. During the noon hour on Friday, the City of Lanett thanked its lineman by hosting a luncheon in their honor at the Jane Farrar Event Center in the downtown area.

“None of you guys have the most glamorous job in the world,” Mayor Kyle McCoy told them. “It’s tough when you have to get up at 3 a.m. to get the power flowing again after a storm has come through. You guys know it’s a job you have to do, and we thank you for what you do for the people of Lanett. It’s a testament to the kind of work you do that we have upgraded our system this past year. We want all of you to know we appreciate you for all you do.”

The City of Lanett has approximately 3,500 utility customers, more than 80 miles of city streets and more than 225 miles of utility lines. The city’s electrical department has three bucket trucks and a line truck to assist the men in keeping the power flowing.

Alabama Lineman Appreciation Day is observed on June 7. Lisa Miller, manager of communications and economic development for the Alabama Municipal Electric Authority (AMEA) will be having an infographic about the day by early June. It can be found under the hashtags #ThankALineman and #public power cares.