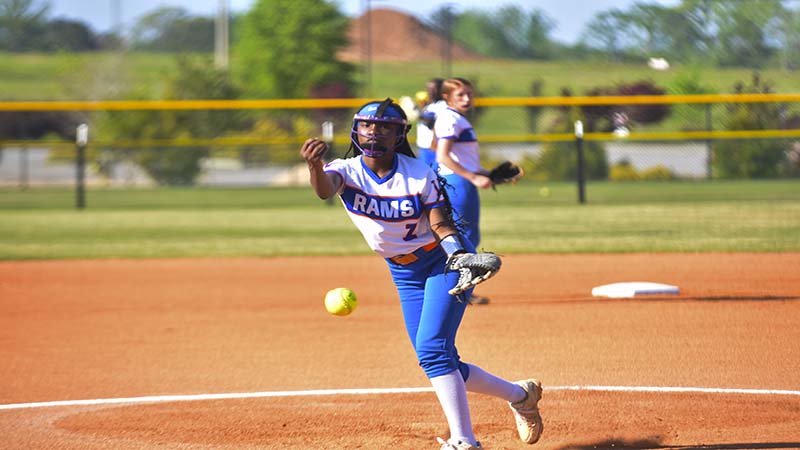 For the first couple of innings, Valley softball was battling with area opponent Eufaula. Every time Eufaula scored, the Rams would answer back with a run or two of their own. Unfortunately for Valley, Eufaula hit two home runs, and several Valley defensive miscues led to a 13-5 loss.

“We came out and ready to hit. They jumped and we jumped right back in. At the plate, we were aggressive, but we couldn’t get it done in the field,” head coach Torie Hopkins said. “We had too many errors. They had two home runs that hurt us. We left 14 batters on in the entire game. That’s stuff that we can’t allow to happen.”

After allowing a run in the top of the first inning, Valley quickly answered. The Rams led off the game with three straight hits, a pair of doubles and a single. With two runners on base and no outs, Valley looked like it would have a big inning and take the lead, but it couldn’t scratch across another run, leaving the two runners stranded in scoring position, something that became a theme throughout the game.

Eufaula scored two runs in the second and third innings before breaking through with a four-run fourth inning, putting the game out of reach.

“I thought she did really well,” Hopkins said. “Once they started seeing her in the fourth inning, they scored four in the fourth, I knew then it was time to give them something different to see. I’m very proud of our eighth-grader to come in and pitch, knowing that I have a very solid infield.”

Valley will finish its regular season on the road before traveling to Opelika for the 6A Area 4 tournament.

“We’re not done yet, that’s what I keep telling the girls,” Hopkins said. “We’re ready to go out there and fight. We’re going to face them [Eufaula] the first game of the playoffs, and hopefully, finish the job that we should have finished tonight.”