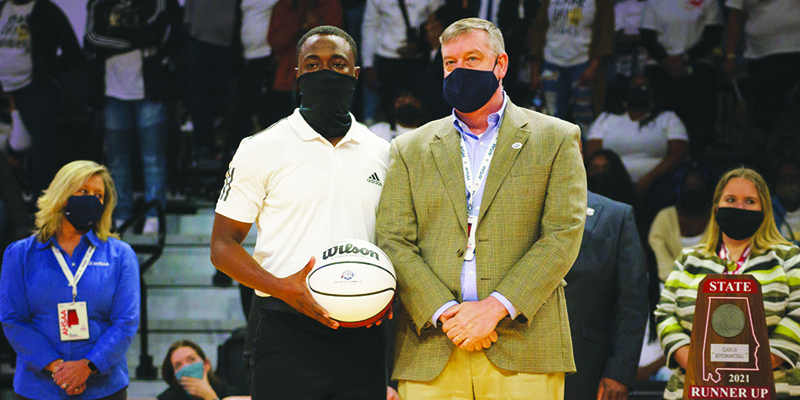 Coming into the season, head coach Trentavious “Tay” McCants had high expectations for his team. Though it was his first year as Lanett’s head coach, McCants had his eyes set on Birmingham and the Panthers’ second straight championship appearance.

Lanett reached the championship game and narrowly lost. Because of the team’s dominant season, McCants has been named the Greater Valley Area Boys’ Basketball Coach of the Year.

Lanett dealt with its fair share of adversity this season. After playing its third game of the season, Lanett had to shut down for about a month due to a positive COVID-19 case on the team. The Panthers also had to deal with the closure of its gym at the end of the season, as the school’s Feb. 1 fire knocked out all essential utilities and the team’s locker room.

“We embraced it all, but I think it made us better,” McCants said. “At the beginning of the season, we had a lot of bad things happen, but it helped us in the end. It gave us the courage and strength to fight through a lot of adversity throughout the season to make it through the championship. Unfortunately, we didn’t come out with the victory in the end, but we’ll be back next year.”

The fire ended Lanett’s regular season early, as Lanett had to cancel the final game of the season. Instead of having to go on the road because the gym was unusable, Lanett was able to host the area tournament and the sub-regional game at the Lanett Rec Center, a place where most of the 2020-21 team learned how to play basketball.

“I think the fire kind of come together because everyone was kind of down and shocked at the same time,” McCants said. “Going back to that rec center brought back a lot of memories and it just made us feel like we were taking them back. That’s something that we were saying during the season was we were taking them back to back. We had a lot of success at that rec center. A lot of things happened at that rec center as far as them developing, and I think that’s what helped us push through the Vincent game and get ready for the region championship.”

Though this season was McCants’s first year as Lanett’s head coach, he had playoff experience, as he had been on the Panthers coaching staff the past five seasons. During four of them, Lanett reached the state championship game.

“Of the past six years, we’ve been to Birmingham five times. Being under coach [Richard] Carter helped me a lot,” McCants said. “He gave me room to grow, and I just watched him a lot. He showed me what to do when we got to Birmingham. Me being a head coach now, I looked back on that and I appreciate him.”

Though his experience with Carter taught McCants a lot about coaching, this past season was the only time he had to deal with every facet of the team, including grades and discipline both of which was something he had never dealt with before.

While McCants was following a legend in Carter, McCants wanted to put his own stamp on the boys’ basketball program.

One year in, McCants feels like he is putting his stamp on this team.

“I think it went great. I wish we would have come out on top with a state championship, but I’m proud of my guys, and I’m proud of my staff,” McCants said. “I think we set the tone for years to come under my leadership. Coach Carter did a great job and the coach before him did a great job of keeping this thing rolling at Lanett. I’m just happy that I was able to step in and get us to the championship. Hopefully next year, we can win a championship.”