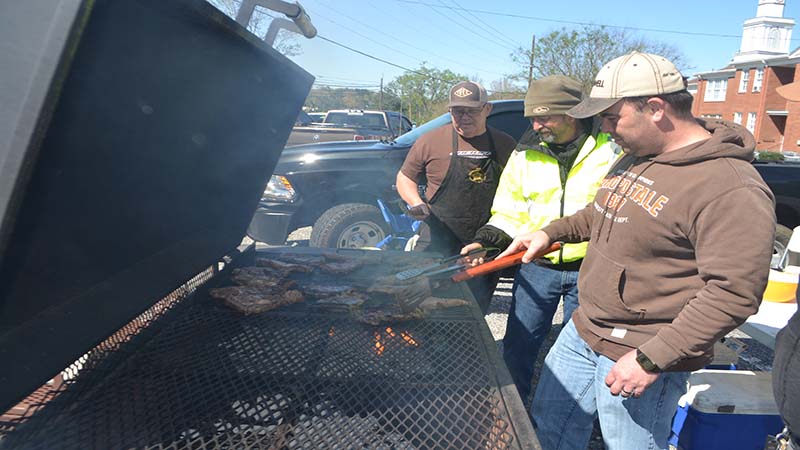 VALLEY — The community response was outstanding for the steak dinner portion of the Grillin’ for Girls fundraiser for the Tallapoosa County Girls Ranch. All of the tickets were sold for the Thursday, April 1 event at the Langdale Methodist Church and the Friday, April 2nd portion at the ALFA Building in LaFayette.

Girls Ranch Director Candice Gulley and a group of girls from the ranch came over to Langdale Methodist Church Thursday afternoon to thank Sheriff Sid Lockhart and his cooking crew, who were very busy preparing ribeye steaks on portable grills on a chilly, windy afternoon.

“We appreciate the support we have gotten from the people of Chambers County,” Gulley said. “They came through for us in a big way, and we really appreciate it. Last year’s Grillin’ for Girls was great, and this year is even better. Ticket sales were up some 45 percent.”

Gulley is originally from the Mobile area. She was a house parent at the ranch for 10 years before becoming the director two years ago.

“I love what I do,” she said. “There aren’t many jobs where you can love what you do and live there at the same time.”

The tickets were $25 each with each one good for a ribeye steak, sides and a drink. Plates were scheduled for pickups between 5 and 7 p.m. EDT in Valley and 5 p.m. to 7 p.m. CDT on Friday in LaFayette.

The three-day fundraiser concludes with a 5 p.m. CDT virtual auction on Saturday.

Last year’s Grillin’ for Girls raised over $7,500 for the ranch. That money was used to purchase a four-wheel drive truck needed to haul cattle and horses on the 200-acre ranch. The truck made a trip over to the Valley in December, bringing the horses the girls rode in the Valleywide Christmas Parade.

Funds raised this year will cover the cost of remodeling three bathrooms in one of the ranch houses.

There are three such houses at the ranch, each one with two house parents and up to nine girls. There are three bathrooms and five bedrooms in each ranch house.

Sheriff Lockhart has a personal connection to the girls ranch that goes back to the year it opened in 1973. He put in the floor covering in the first two homes that were built.

Everyone is invited to watch and to phone in their bids.

The Tallapoosa County Girls Ranch is a foster home for abused, neglected and abandoned girls. They are there through no fault of their own. The ranch embraces a theme that it’s better to raise strong young people than to repair broken adults. The girls are raised in a Christian environment and attend local public schools, where they participate in extracurricular activities such as sports, band and cheerleading.