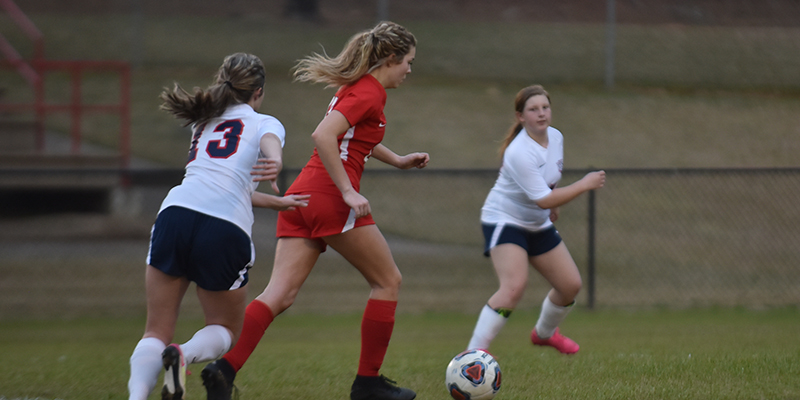 When spring sports shut down in March of 2020 due to the start of the pandemic, the Springwood girls’ soccer team’s inaugural season was cut short. The team finished 0-5.

After missing the first week of the season due to a COVID-19 outbreak, Springwood got its first win in program history, defeating Fort Dale 4-1.

Less than five minutes into the game, Madison Reeves scored the Wildcats’ first goal of the year and her first goal as a Wildcat.

“I was kind of excited, then I was like ‘okay, we need to get more,’” Reeves said.

Reeves has made several impacts on the young team in her first year at Springwood.

“She’s made a huge impact on the other girls,” head coach John Lanier said. “Just the intensity that she plays with, she uplifts the girls and gets everyone going. She’s just a really hard worker that gives it her all.”

Last school year, Reeves attended Troup High School, where she was a member of the Tigers’ soccer team, meaning she is one of the few players that had experience on the team outside of the five games from last season.

In her lone season at Troup, Reeves played on defense. During Springwood’s tryouts for this season, Lanier noticed that Reeves was one of the more dynamic players. She could put shots in the back of the net and was quick and physical enough to slow down an opponent’s run.

Lanier put her at center-midfield, where she can make an impact throughout the field.

“We had tryouts, and I just remember that she was going through the defense and scoring goals,” Lanier said. “She can honestly play anywhere. She’s the backup goalkeeper as well. It is one of those things that you couldn’t make a mistake putting her anywhere. Last year, we struggled at scoring goals, and when I saw her at tryouts being able to put some in the back of the net, it is where we needed her.”

Along with the ability to affect the game on offense, Reeves is one of the more physical players on the team, something she showed playing basketball this past winter. Last season, Springwood struggled to stop opposing offenses, due to the fact they weren’t physical and aggressively making attempts at the ball. The addition of Reeves and a couple of other players has helped Springwood progress throughout the season, often playing teams much closer in their second matchups.

“Last year, we worked on it, but we weren’t as aggressive and intense as we needed to be,” Lanier said. “Adding Maddy and a few other girls that are very intense and want to do whatever it takes to win. That’s been a huge help and a great example to everyone else. It’s upped everyone else’s game as far as intensity.”

With the progress that Springwood has made this year, the Wildcats will play in their first playoffs, as they travel to Fort Dale for a first-round matchup on Tuesday.

“It’s been huge for the program and for the girls’ confidence,” Lanier said. “We’re going into the playoffs hoping to make some noise. We’re playing a Fort Dale team that we’ve already played. We have to go there, so it’s a little different. We’re excited about it, and we’re looking forward to it.”

Springwood hosted Fort Dale in its second game of the season. In that game, four different girls scored for the Wildcats.

Though they won the first game by a solid margin, Lanier doesn’t want his team to overlook the first-round matchup.

“It was early in the season, and a lot can change,” Lanier said. “We’re better, and I’m sure they’ve gotten better. You never know when it’s been that much of a time period. The first one was here, and the next one is there, so you never know. You have to work hard, do your best. I think we’re better than we were at that point. We’ve kept improving throughout the year. I’m looking forward to it.”