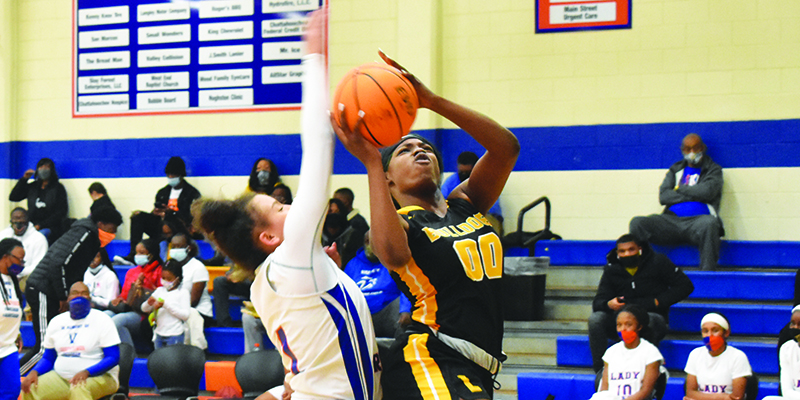 The past four years have been a journey for Feliah Greer.

The LaFayette standout moved to LaFayette right before the start of her freshman year of high school. She hit the ground running as a freshman, standing out on the Bulldogs’ girls basketball team, en route to her first Greater Valley Area Player of the Year recognition.

Now a senior, Greer is once again the Greater Valley Area Player of the Year, winning the award for the fourth consecutive year.

When Fred Bridges became the Bulldogs’ head coach at the start of the 2019-20 school year, he implemented a very different system, which allowed the Bulldogs to become more balanced. Though the Bulldogs were a much more balanced team, Greer still shined, averaging 28 points and eight rebounds a game.

In the first three years of her career, Greer was always able to get to the rim, either finishing with a layup or getting fouled and going to the free-throw line.

As a senior, she still showcased that ability, but she showed she could be a complete player. Greer still averaged 26 points and eight rebounds a game, but she was able to get her teammates more involved in the game, as she averaged a career-high six assists.

She also showed she could score in multiple ways, as she went from solely driving into the paint to score to knocking down 3-point shots, open or contested.

“At the college level, I feel like I won’t be able to do what I’ve been doing in high school, so I had to get my outside game up,” Greer said. “I have to be a shooter from anywhere. I shared the ball and got my teammates more involved this year.”

Overall, Greer has scored more than 2,000 points, finished with nearly 500 steals and a little more than 200 blocks in her career.

In her four years at LaFayette, Greer has been a part of two very special teams that broke program droughts. As a junior, Greer led the Bulldogs to their first regional appearance in 12 years. She finished with 25 of the team’s 64 points in the sub-regional game against Ohatchee to send the Bulldogs to Jacksonville State.

This past season, the Bulldogs once again reached a regional game, as Greer scored 21 points against Vincent to send them to the second round of the playoffs.

Because of COVID-19, the Bulldogs had to travel to G.W. Long for the regional game instead of traveling to a neutral site for the game. It didn’t matter, as Greer scored 29 of the Bulldogs’ 57 points to send them to a regional championship.

Though LaFayette fell in the regional championship to Lanett, Greer still was a force to be reckoned with. In her final high school game, Greer scored 23 points while adding eight rebounds and five steals in the six-point loss. She excelled at the free-throw line, hitting 13 of her 15 attempts.

“I’m going to miss playing with my teammates,” Greer said. “I just wish we had some more years. I feel like we were just getting started under coach Bridges. It was amazing. We set the goal to get to Jacksonville. Then we set another goal to make it to the third round. We made our own history. The legacy is just getting started.”

This season, Greer learned how to persevere even when things weren’t going her way.

“To go hard and never give up. Never stop until you hear the whistle,” Greer said of the biggest lesson she’s learned this year.

Greer will continue her basketball career in college. While she’s decided on the school, Greer is waiting to make her announcement until she is ready to sign.

“The recruiting process has been good. I’ve been going to different schools, seeing different environments and different people,” Greer said.