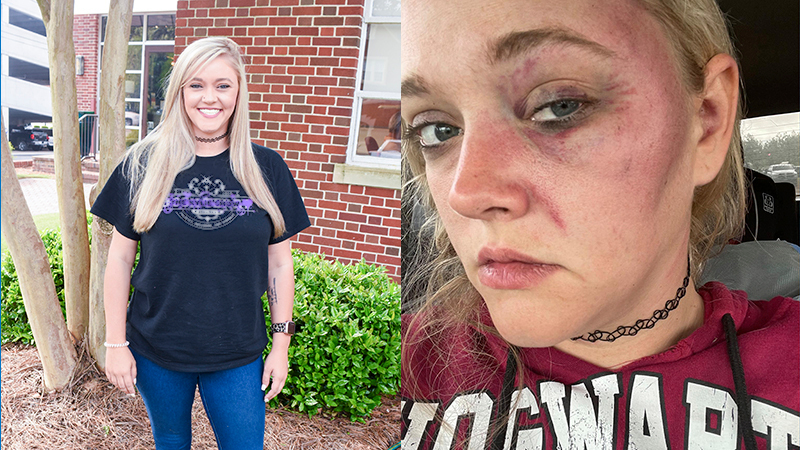 LaGrange native Kylie Strickland, a TikTok influencer whose videos reached millions of people, was recently a victim of domestic violence, and she’s used her platform to speak out so that others won’t experience a similar fate.

Strickland, 29, was attacked by her boyfriend, Cody Weems of Salem, on April 11, in Thomaston, according to a police report from the Thomaston Police Department. Weems has been charged with aggravated assault, aggravated battery, aggravated sexual battery, kidnapping, burglary and battery. He was also charged with assault on an unborn child, as Strickland said she was pregnant at the time of the attack and even told Weems that during the attack, per the police report.

“If I can help just one person, one woman leave a situation like that, then that’s all that matters to me,” Strickland said. “I’ve had multiple women reach out to me about how I’ve empowered them to leave their situation where they’ve left before it got to that point.”

According to the police report, Strickland told police that Weems broke into her home through a bathroom window and started yelling at her, open hand slapping her in the face. Weems then noticed another man in the home and attacked him.

After the man fled to another bedroom, Weems allegedly grabbed Strickland by the hair and throat and dragged her toward the woods. According to the police report, he covered Strickland’s mouth and nose and told her “she was going to die tonight.” He threatened not only Strickland’s life, but the life of her four kids, according to the report.

When she told him she was pregnant, the police report says he began to stomp her stomach.

Weems stopped when he noticed a patrol car coming down the road, allowing Strickland to get away, per the report. Weems was arrested later that day.

Strickland said she was left with a fractured nose, broken tailbone and was bruised all over her body. She said that was far from the first time he had abused her. She noted another incident had occurred in LaGrange just four days before the incident in Upson County where Weems had choked her and she ran into a business to get away.

Her injuries left her hospitalized, but even there she immediately went to TikTok, sharing photos, videos and information about what happened to her audience.

“TikTok is my job, and I live stream all day long. It’s like a reality show to people, so I knew if I came on there and make videos and had a black eye, people are going to want to know what the heck happened to you?” Strickland said.

The videos were viewed millions of times and were trending on the social media platform, with major influencers on the platform wishing her well and sending support.

“It was by the hundreds. It was so hard to keep up,” she said. “We are a family. We all talk to each other outside the app, we get ideas from each other, and we come together when we need to.”

Strickland, who lived in Troup County all of her life until about a year ago, is a Callaway High graduate and her dad owns Pizza Villa, a longtime favorite in Troup County, so she has strong ties to the local community. But through her TikTok following, she’s been able to reach millions of people.

Her videos are silly, all over the place, 60-second snippets of her life. They typically involve whatever she has on her mind at the time. Due to language, many aren’t safe for work.

“The reason people love me so much on TikTok is because I’m so real, I’m so open, and I’m so transparent with my life, the good and the bad,” Strickland said.

She said her videos grew in popularity quickly, which allowed her to become an influencer on the platform. Now, she gets paid around $1,000 a month for her videos. She also gets paid more for live videos on the platform, where people send her money.

Strickland said she posts about 10 times a day, allowing her to create her own schedule.

“I said I’d never get the app because I thought it was a kid’s app,” Strickland said. “But then I got divorced, and there was one video that I saw on Facebook that I wanted to do. I got on there and made it and then I didn’t stop making videos. It just grew really fast from there. I kept making them and people loved it.”

Her account was recently banned, and Strickland doesn’t know why. She’s working to recover it, as her millions of followers and all her videos are gone unless TikTok reverses the decision. Strickland said many other top creators are also dealing with similar issues.

“I’m still trying to get my main account back because a lot of big creators are getting their accounts back after being permanently banned,” she said. “If I have to get a lawyer, I will because they owe me money, and I can’t sign onto my account. There’s money on there that’s mine.”

Strickland’s income is the epitome of living as a social media influencer in 2021, a way to earn more income that didn’t even exist until a few years ago. However, she admits TikTok isn’t the only place where she makes a living.

Strickland said her videos on OnlyFans are sexual, and she says she makes more than $80,000 a month on the platform. She showed the LDN a receipt showing her income from the platform.

Strickland said before her TikTok fame and her OnlyFans, she was working long shifts as an EMT and rarely saw her four kids.

Although she realizes many will look down on her choices, she now sets her own schedule. She said she can pay for dinner for her entire family when on vacation or buy nice Christmas gifts because she’s making so much on her platforms.

“Aside from the money part, the confidence that gives me is empowering. That makes you feel good about yourself,” she said. “Call it wanting attention or whatever… to people that look down on it, you are doing the same thing, you just aren’t getting paid for it. That’s all it is. Anything you send to whoever, they could send it somebody, they could show it somebody. They have an Onlyfans, you just don’t know it, and you just aren’t getting paid for it.”

She doesn’t plan to be a social media influencer forever. One day, she’d like to open an entertainment center for families in LaGrange that would include a bowling alley, ax throwing, an arcade and other fun activities.