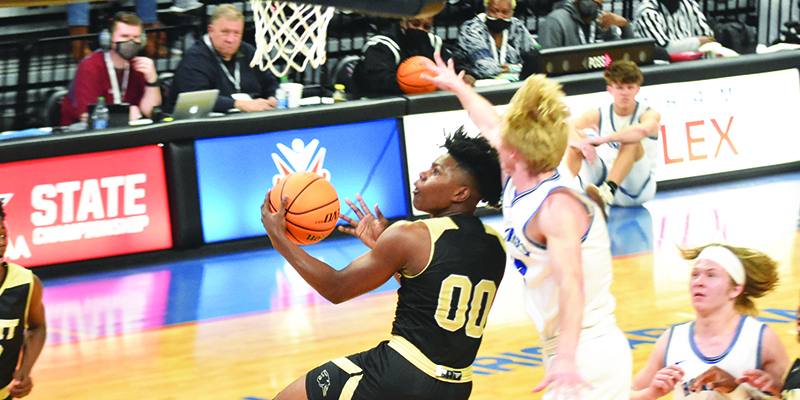 During his two years at Lanett, Kintavious “Kin-Kin” Dozier has shown that he is one of the top players in the state.

After lighting up the Panthers’ schedule during the 2019-20 season, averaging 26 points, four rebounds and five assists a game, Dozier took his game to another level as a senior en route to a second state championship appearance.

Because of his stellar performance, Dozier has been named the Greater Valley Area Player of the Year.

“I feel like it was a great year,” Dozier said. “It came with a lot of ups and downs. It taught me how to have that perseverance and braveness to just keep ongoing. I had a lot of people behind me and riding with me, so that kept me going a lot. It felt good to make everyone looking at me proud.”

Dozier was a focal point of the Panthers’ offense this season, averaging 31 points, six rebounds and six assists a game. He was Lanett’s biggest threat behind the arc, casually hitting 3-point shots from college range, but he also showed his versatility, often blowing past his defender for a shot at the rim.

During the playoff run, Dozier showed how effective he could be as a passer, often drawing attention on himself and flashing a no-look pass to a teammate in the paint for an easy score.

Though he lit up the stat sheet on a nightly basis, Dozier was focused on giving his team the best opportunity to finish each game with a win.

“I really don’t care about my stats, I just want to win,” Dozier said. “That just comes with it. If I had to score two points but we win, that’s just what I’m going to have to do. I don’t really look to go out there and get my stats. I’m just going to win.”

During his junior year, Dozier was primarily an offensive player, but as a senior, he developed into a more well-rounded player.

On defense, Dozier harassed ball-handlers, finishing the year with more than 70 steals.

“It’s all about talking and having that energy,” Dozier said. “When you have energy, it falls back to everybody, the coaches and you have your teammates going. If everybody has that energy, everyone would want to do anything.”

Dozier showed that energy throughout the season. One of the more noticeable times was in Lanett’s Regional Championship game against Geneva County.

After trailing by double-digits for most of the game, Geneva County dominated the third quarter and tied the game early in the fourth. Dozier responded by hitting a 3-point shot with a man in his face. While Lanett was setting up into its 1-3-1 zone, Dozier, who was at the top of the zone, turned to his teammates trying to pump them up. Lanett forced a turnover and Dozier hit a second shot from behind the arc to give Lanett a six-point lead. The Panthers eventually won the game by 16 points.

“It’s great. My coaches helped me a lot with the leadership part,” Dozier said. “I didn’t really think too much about it, but it’s a part of your game that you need to learn. I tried to hold myself accountable for stuff like that.”

Dealing with adversity was head coach Trentavious “Tay” McCants’ message to the team this year. Lanett missed time due to covid and the team dealt with a fire that forced it to change its practice schedule, cancel its final regular-season game of the year and play at the Lanett Recreation Center instead of its own gym. Dozier said the biggest lesson he learned from the season was how to deal with adversity.

“When it gets hard, you go even harder. I learned that from coach Tay [McCants],” Dozier said.

Dozier will continue his basketball career after Lanett, announcing where he will sign at a later date. Overall, Dozier has received several scholarship offers from schools around the country, which gave him the confidence boost he needed during his final high school year.

“It felt good. Me getting hit up by a lot of coaches, it showed me that I can go to the next level and it gave me more confidence,” Dozier said. “I’m still striving to get to things even bigger than that. That’s not even the end goal.”

Dozier’s end goal is to play in the NBA, which would make him the second player from Chambers County to reach basketball’s highest level.