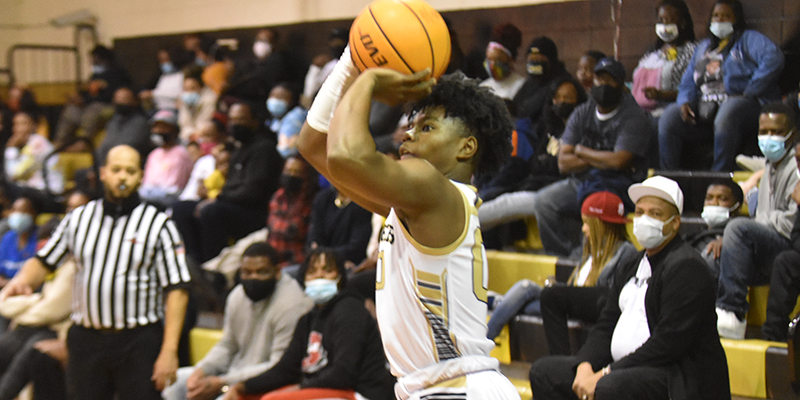 The past two seasons, the Lanett boys basketball team reached the state championship game. One key reason for the two deep postseason runs was senior Kintavious Dozier, who stepped up as an overall player as a senior instead of the dominant offensive weapon he was as a junior.

Because of his growth and hard work, Dozier drew a lot of attention this season from colleges. On Sunday, Dozier announced that he would continue his basketball career at Gadsden State.

“I felt like that it was the best decision not only for me but for my family,” Dozier said. “They showed a lot of love. They were the first school to even get at me. Why not go with it?”

Gadsden State finished 13-10 this past season, finishing third in the Alabama Community College Conference during the regular season. Gadsden State also has a history of sending players to four-year colleges around the country, which is something that is important for Dozier, as he strives to reach his goal of playing in the NBA.

“That’s very big,” Dozier said. “I want to be able to give everyone around here hope, plus it’s just my dream anyway. I just have so much love for it, I’ll do anything to get to where I need to go.”

Since Gadsden State was the first school to reach out to Dozier to let him play at the next level, it saw the growth of the senior, especially his growth as a leader and on defense.

As a junior, Dozier was a dominant offensive force, scoring 26 points a game while adding five assists and four rebounds. As a senior, he took his game to the next level overall, averaging 31 points, six rebounds and six assists a game. He also finished with more than 70 steals on defense.

“They like me all around. They like the way that I control the offense and how I step up as a leader,” Dozier said.

Dozier has the ability to score from anywhere on the floor, as he has shown he can score in the paint against much larger defenders and from behind the arc, even hitting shots behind the NBA 3-point line (23.75 feet compared to 19.75 feet for high school).

Dozier’s statistical improvement came from his work in the offseason. Almost every day during the summer and school year, Dozier was working out either one or two times a day. He would put in his work in Lanett before traveling to LaGrange to work with Dante Wade, who works at Clockwork Performance Training.

That hard work in the offseason solidified his confidence and his decision to sign with Gadsden State.

“I feel very good and confident about it. I have confidence in myself that I can play at the next level, but I’m just hoping to get as much experience as I can just to elevate my game and get better and better every day,” Dozier said.

Alongside his recruitment, one big factor for Dozier to choose Gadsden State was the chance to play with Valley’s Quez Trammell. Trammell and Dozier were teammates growing up, playing two years together at Valley before Dozier transferred to Lanett.

“I’m very excited. We’ve been talking about that for so long,” Dozier said. “When I got offered, and we found out that he had an offer too, we had to make it happen. That was another part of why I committed. It’ll help a lot because we’ll be going through the same thing as freshmen in college, just figuring life out and figuring the campus out. It’ll just be amazing getting a chance to grow alongside my brother.”

The pair combined to average 51 points and 15 rebounds a game during their senior years. They showed they still had their chemistry in early March, as they competed in an Alabama/Georgia All-Star game hosted in LaGrange. Trammell finished with the MVP award in the game.

“We’re like a well-oiled machine,” Dozier said. “We get along well, and we know how each other plays.”