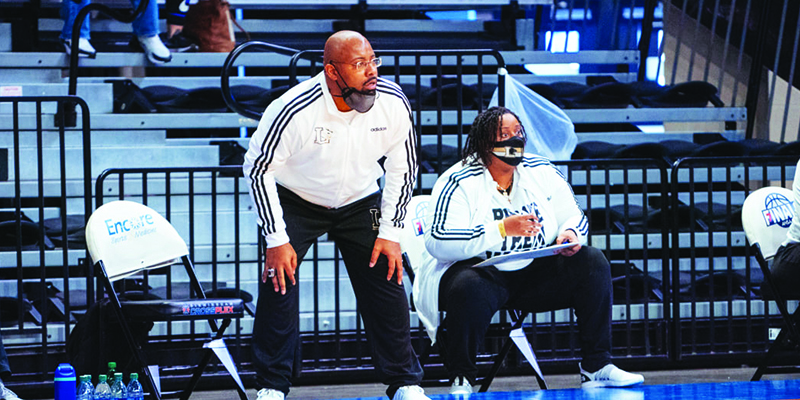 When Lanett Athletic Director Clifford Story gave Charlie Williams the girls’ basketball head coach job, he told Williams he wanted the girls’ programs at Lanett to rival the boys’ programs. At the time, the boys’ basketball team had just won its second straight state championship, while the football team had just picked up its first championship.

Now in his fourth year, Williams has delivered for the Lanett faithful, leading the Lanett girls to their first semifinal-game appearance since 2012, and he nearly led the team to the state championship game.

Because of the season the Panthers put together under Williams’ leadership, he has been named the Greater Valley Area Girls’ Basketball Coach of the Year.

“It’s still kind of like a dream to me. Even today, with covid still out there and things being canceled or rescheduled because of it, it still hasn’t really sunk in,” Williams said of the season.

Lanett started its season in early December but played just two games before the team was shut down due to a positive COVID-19 test. The team missed the rest of the month and the first couple of weeks of January before playing its next game.

“It was a challenge,” Williams said. “Every year you’re going to face a new challenge, I don’t care if you go 30-0 or 0-30, you’re going to face a challenge. This season, covid was our challenge, but we had great leadership. Breanna Glaze, Ameria Zeigler and Alyse Madden, Samaria Davidson, Jakiya Littles, Ariel Hall never gave up on the fact that we weren’t going to have a season. They continued to Zoom with each other and always stayed in contact with me. It was my players more than me.”

Once the Panthers started back, they struggled, losing five of their first six games back from quarantine. After the loss to East Coweta, who was one of the more dominant teams in 7A in Georgia, Lanett started to turn its season around.

“I just told them to get better every game. I knew that we weren’t going to start out on fire because everyone that we’re playing against didn’t shut down for covid,” Williams said. “Their bodies and minds were already conditioned for basketball at the time. It’s hard coming off a break that long and jumping right back into it. It doesn’t happen that way. I just told them to keep getting better as the season goes on, and they did.”

In the previous three years, Williams has been forced to do more than just coach his team. This year, his leaders took the team over and ran with it instead of Williams having to call and adjust every play.

“This was probably the most fun I’ve had because I didn’t have to do much. I had to direct them in certain situations, but they finally took it over and made it their team,” Williams said. “It wasn’t just one person. You could hear four or five different girls taking over the leadership role.”

With the leadership his team showed this season and going through the trial of the covid break, Williams developed as a coach and learned how to keep a cool head during a game.

“When I first started coaching, I always used to ask for patience. Every time I asked for patience another trial would get thrown in front of me. Instead of asking for patience, I started asking for strength. Once I started praying for strength, it cleared my aspect on how everything started to fall in place for me,” Williams said. “I think more than anything, I’ve learned how to be a more level-headed coach this year. When I say level-headed, I mean to stop looking at the play that’s in front of me and start looking three, four or five plays ahead of that. If you try to coach yourself in every aspect of basketball, you’re going to drive yourself crazy.”