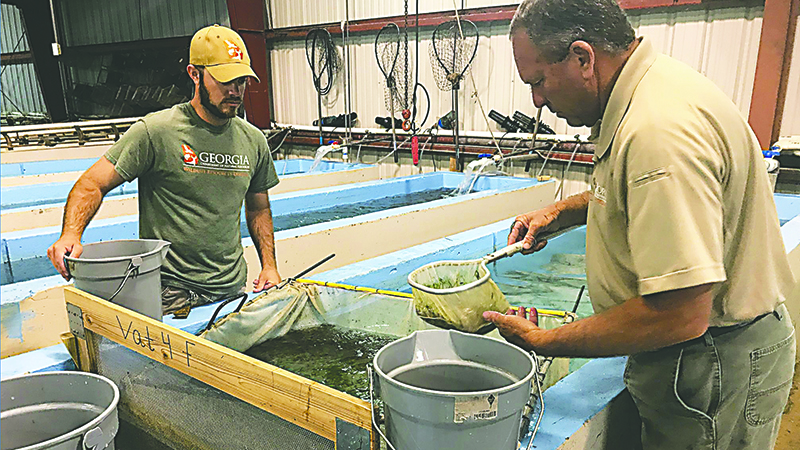 More than 446,000 largemouth Bass have been distributed into West Point Lake in a hope to revitalize its population. The goal is to get roughly half a million to grow by the end of the year. --Contributed

By Shiann Sivell
The Valley Times-News

As troves of fish anglers head to areas like West Point Lake for outdoor leisure, biologists with the Georgia Department of Natural Resources are hard at work distributing thousands of largemouth bass into the waters to keep up with fishing demands.

Biologists have already distributed over 446,000 largemouth bass into West Point Lake this April and have a target of getting half a million bass growing and thriving into the lake within a year.

“It takes time to figure out if it’s working … but we are seeing a percentage of the fish that we restocked are surviving and growing,” said Jim Hakala, Region 1 fishing supervisor for West Point Wildlife Management Area, a division of the Georgia Department of Natural Resources.

Restocking the bass is a yearly tradition that is constantly noted by anglers in the area, said Patrick Crews, chairman of the Troup County Board of Commissioners.

“[The stocking] has the potential to be very big … it will supposedly, in a year or two, those fish will be the size that we’re hoping will make West Point a very desirable lake,“ Crews said.

DNR biologist Brent Hess said several local anglers have been assisting with stocking bass directly into good habitats, rather than being stocked at the boat ramp.

Since 2016, the DNR has distributed over 2 million largemouth bass into West Point’s waters, Hess said. The amount of bass distributed during each stocking depends on the availability from the DNR’s hatchery system.

Biologists have also installed fish attractors and habitat improvements within the waters, including planting native water willows in the shallow portion of the lake and fish piles that provide places for fish to hide.

The goal is that the population will increase and offset that of the spotted bass that also resides in West Point, Hakala said.

The restocked fish also have “very high [Florida-strain bass] alleles,” which allow them to grow larger than their relative Northern-strain bass.

Revenue from the licenses helps the DNR with their various wildlife conservations like bass restocking.

Fishing licenses can be purchased at https://georgiawildlife.com/licenses-permits-passes.