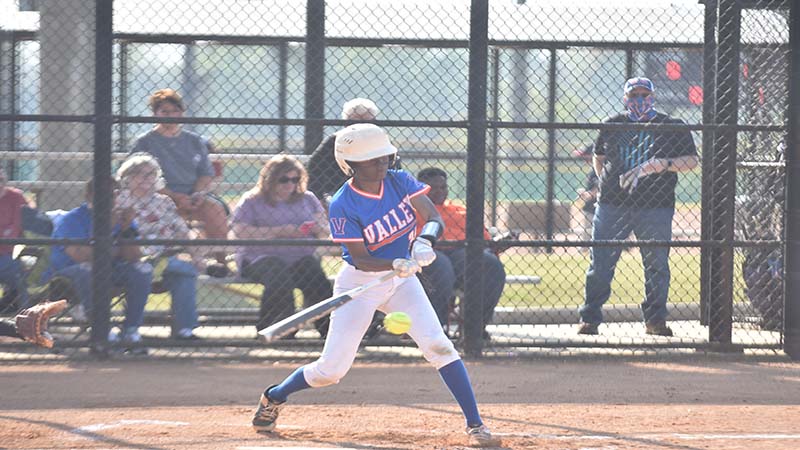 The Valley softball team found itself in a hole in the bottom of the sixth inning.

The Rams trailed by a run and were struggling to string together hits against area opponent Russell County. With two outs in the bottom of the sixth inning, Valley rallied to score four runs, winning the area game 7-4.

“Coming off of spring break with no practice for a week was definitely tough,” head coach Torie Hopkins said. “They were excited to come out here and play. We started out very rocky. Offensively, we couldn’t get it done at first. We had 10 pop ups when we should have had 10 hits. Defensively, we did great. KK [Kaylin Green], our senior on the mound, did great. We brought out eighth-grader [Kali Harper] in to finish the game and she did great.

“The girls finally opened up with the bats. With two outs in the sixth inning, we had a rally, and they were able to get it done and finish it right there. I’m proud of them.”

Valley scored the first run of the game in the bottom of the second. With two outs, Valley had the bases loaded for junior Laila Jones. Jones reached on an infield single to drive in a run. Sophomore Charlee Quinton followed the infield hit with a double to right field, scoring two more runs.

Valley led off the inning with a pair of flyouts to the outfield, putting the pressure on the bottom of its order. Back-to-back walks set the stage for Jones, who hit into a fielder’s choice that scored a run. Quinton followed with a triple to give Valley the lead. Quinton scored on a single from Madison Chandler, who scored on a triple from Green.

“Being able to adjust to a pitcher is a huge thing for good hitters. At first, they were not able to adjust,” Hopkins said. “I was telling them to ‘wait and be patient. Once your hit is there, drive through the ball.’ That’s what they started to do in the sixth inning. I was really proud of them.”

The Rams play again on Tuesday when they travel to Smiths Station. The Rams will also host Opelika on Thursday before traveling to Opelika to finish the week in a tournament.

“The girls have a huge week ahead of them coming off spring break,” Hopkins said. “I just hope they’re ready.”