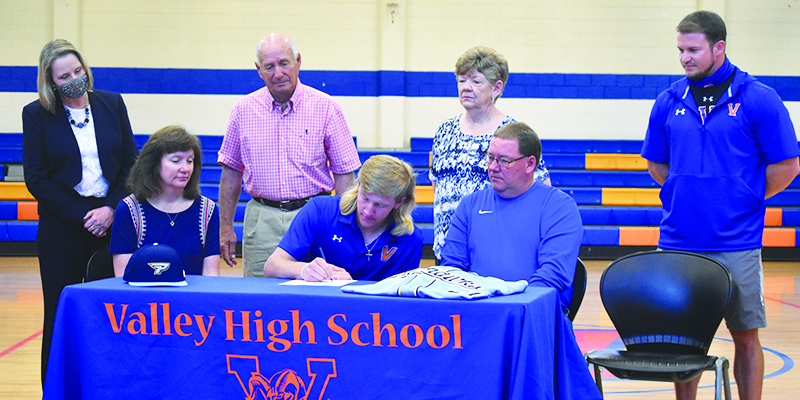 When Valley senior Hunter Meadows was trying to figure out where he would continue his baseball career, one of the primary keys for him was to find a place that he felt comfortable and could feel at home.

He found that home at Point University and signed his scholarship offer on Tuesday surrounded by his family, teammates and coaches.

“It’s a great program. I just feel at home there,” Meadows said. “It’s close to home, which helped a lot. I loved the atmosphere it gives off.”

Throughout Meadow’s recruiting process, the Point coaching staff talked a lot about Meadow’s ability to throw strikes on all three of his pitches, something that he has shown the past three years for Valley.

The Point coaching staff also talked to Meadows about his ability to make an impact as a freshman if he works hard during the off-season, something that head coach Patrick Shivers believes he can do.

“I’ve had the great pleasure of coaching Hunter pretty much the entirety of his career here at Valley,” Valley head baseball coach Patrick Shivers said. “There are not enough positive things that you can say about a kid like Hunter. He does everything he’s asked of on and off the field. He’s a great leader for the team in the classroom and out of the classroom. He’s one of the kids that I talk to my team a lot about in the fact that you can only be as good as what you do outside of practice time. Hunter has always been a huge worker in his own time. He has his parents and a bunch of other people to thank for that. I’m very fortunate to have this opportunity to coach him, and I wish him all the best and success as he gets the opportunity to further his baseball career at Point.”

Meadows signed to pitch for the Skyhawks, where he has been Valley’s most consistent strike-thrower the past three years. Though he will be a pitcher, Meadows showed his versatility, as he has played nearly every infield position and is Valley’s cleanup hitter.

“Hunter has been able to play multiple positions for me ever since he began starting on the varsity level. He’s played third, he’s played short, and I think he’s even played a little bit of second,” Shivers said. “He’s been one of my best arms the past three years, as far as a guy that can pound the zone. Point got a good one. I anticipate for him to get stronger and bigger. I know right now, he’s just an upper 70s, low 80s type of guy, but I think he’s got the frame that Point can build with. I’m excited for him to get the opportunity to play at the next level. Hopefully, they can mold him into a good college pitcher.”

This season Meadows has learned how to step up as a leader, as the Rams graduated several seniors off the 2020 team that were key contributors to success for the past few years.

“It’s been great. Last year sucked because it was cut short. I hated it for the seniors, but I hope they’re living through us right now,” Meadows said.