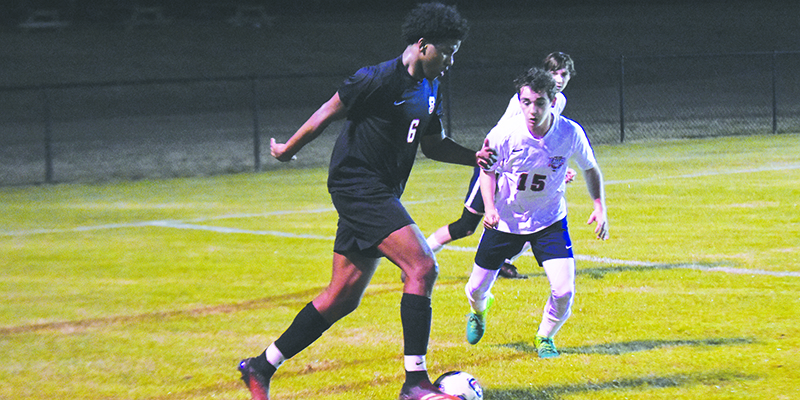 Coming into the season, the Springwood boys soccer team was kind of a mystery for head coach John Lanier. Before COVID-19 shut down its season last year, Springwood had a shot to win the state championship, as it was undefeated and blowing past most teams on its schedule.

Though Lanier had a good team coming back, there were a lot of questions about the team, as it had lost 11 seniors from a year ago, most of which were starters.

One returner that Lanier knew he could count on was senior Tyrese Ferguson, who was one of the players that started a year ago for the Wildcats.

“He’s a winner, and he’s a guy that is going to give you 100 percent always. He doesn’t seem to get tired. He leaves it all out on the field. He’s a leader not only by talking to the guys but also by example on the field.”

Ferguson is one of the four seniors on the Springwood roster this year. Because there was that void of leadership due to the number of seniors that graduated, Lanier turned to Ferguson to be a leader, something he has already done this year, as he was one of the major contributors that led the Springwood boys’ basketball team to Montgomery this season.

“To know that we had to improve our whole starting line, to see what we could do was going to be really hard. I kind of just came into the role. I just work hard and think of positive things. Now, we’re going into the playoffs pretty strong.”

Ferguson, who is one of Springwood’s international students from the United Kingdom, had to readjust to playing soccer in America last season, as the play styles were completely different.

Along with his adjustment to the game, Ferguson’s development came from his hard work during the summer. During the break, Ferguson was living with his aunt in Atlanta, working out with the local high school athletes, former and current college players to develop his basketball ability. It also helped his soccer ability.

“It helped me with soccer because I’m able to play the whole game,” Ferguson said. “Summer workouts made me more athletic, and I’m just stronger than most players. I am just able to do more moves and get goals off easier.”

Ferguson has been an imposing player for most teams this year. The senior has 12 goals this season in just nine games.

“It feels great being one of the main players this year. I go into every single game and players already recognize me and teams adjust to me,” Ferguson said. “I just became a better player in general. I got bigger over the summer. My ball skill was better. Coming here last year, I hadn’t played soccer for four years. Coming back this year, I got in practice a bit more early. I was coming to practices during basketball, so I got my footwork correct. I now know how soccer in America was, so I adjusted to it.”

At the start of the season, Ferguson was blowing past opposing defenders as they tried to guard him with only one player. As the season has progressed, teams have been putting multiple defenders in his vicinity, trying to slow him down. For example, when Springwood traveled to Lee-Scott for the second matchup of the season, the Warriors had three or four defenders around him at all times.

“A lot of the other teams know about him now, so they put multiple guys on him,” Lanier said. “It really opens up things for the other guys. He’s perfectly willing to get an assist to help the team win. Goal scorers want to score goals, but he’s been very unselfish about getting the other guys involved.”

Springwood is 7-1-1 on the season. The team’s loss and tie were against Glenwood.

In the first matchup, Springwood lost 2-0, but in Tuesday’s rematch, the Wildcats fought back and tied the game late to tie 2-2. The two Springwood goals were the only two goals Glenwood has allowed all season.

“Coming into the second game, it was their senior night, Ferguson said. “We felt disrespected that they would try to beat us on their senior night, so we really just fought hard. They got a goal early, but I wasn’t giving up. I was literally screaming at our whole team to make sure that we work our butts off because I was not going to lose to Glenwood twice in my senior year.

“It was a good thing for us that we didn’t lose to Glenwood twice so we can go into playoffs knowing that we can conquer every single team.”

Springwood has one game left before the start of the playoffs and is currently the second seed in its region. Though the Wildcats have a home playoff game locked down, Lanier wants his team to go into the playoffs with as much momentum possible.

“You always want to make sure you don’t get complacent since we’ve already wrapped up a home playoff game,” Lanier said. “I’ve been telling them we have to play each game like we’re already in the playoffs because you can’t take a few games off and expect to turn it back on before the playoffs get here. I’m trying to treat every game like a playoff game to get us in that mindset, to get us mentally and physically ready for what the playoffs are going to bring.”