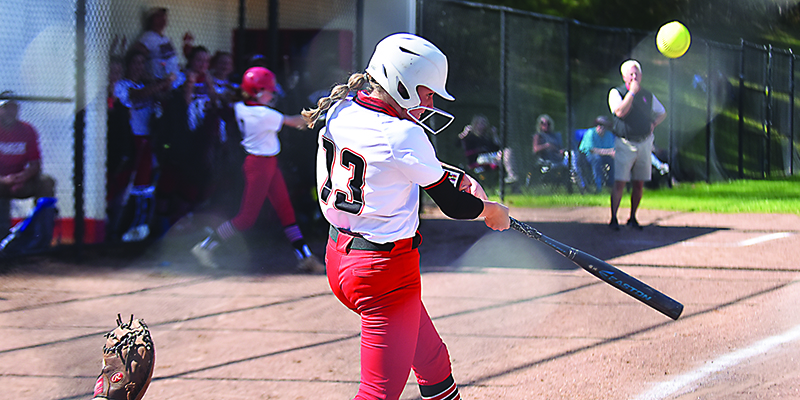 Coming into the season, Springwood softball head coach Galin Smith knew that he was going to have a younger team. The Wildcats have four seniors but for the most part they are a team full of underclassmen, as nine of the 14 players are sophomores or younger.

Because of the youth, Smith needed some of his older players to step up as leaders, so he turned to junior Bailey Morrison.

“Historically, our seniors have been the leaders. They make the decisions on a lot of things, like how we’re going to go about doing things,” Smith said. “Bailey also is a good leader. She’s a good vocal leader, and she also leads by example. She’s not going to ask you to do anything that she’s not willing to do herself. She’s been playing a long time. She’s been part of this program for several years.”

Morrison is the only junior on this year’s team but has been playing for Smith since she was in junior high.

Morrison is one of two returning players that played in the infield full-time last season, as the other three, Miranda Butler, Emma Jennings and Mckayla Barber, all graduated.

At third base, she calls out the plays for the infield, making sure every player is lined up correctly before the pitch.

“I feel like I do have a leader mentality, and I do call a lot of the plays on the infield,” Morrison said. “I’ve been at third even when I was younger, and coach Smith has always just relayed the plays to me. I’ve noticed that some of the underclassmen will ask me between plays ‘what do I need to do for this?’ I really like that. I like being able to be a leader and help the team.”

Though the Wildcats have picked up just two wins this season, Morrison has excelled.

The junior is known for her glove, as she has saved several runs this season by making the tough plays look routine. Against Coosa Valley, Morrison was able to save two runs by making a leaping snag deep in the infield, while in the final home game of the year against Pike Liberal Arts, Morrison made a fully extended catch in the infield that took away a base hit from one of the faster Patriots in the lineup.

“We’ve actually experimented with playing her at other places, but her teammates said they want her at third base. She’s made some really nice plays at third this year,” Smith said. “She holds third base down pretty well for us. Every time I fill the lineup out, third base is pretty locked down, barring injury or anything.”

Though she has been known for her defense, Morrison has stepped up at the plate this year as well.

Batting in the two or three-hole for most of the year, Morrison is leading the Wildcats in batting average. She also excels at moving runners over, as she executes the bunt almost every time Smith calls for one.

“She really has never been known for her hitting ability, but this year she’s hitting over .500,” Smith said. “She’s really driving the ball and hitting it pretty deep. She’s hit several balls over the left fielder’s head. This is probably her best year at the plate.”

Though she is seeing the ball better, the change at the plate has really come with Morrison’s mentality, where she tries not to do too much with a pitch and just tries to find a hole to get on base.

“I really just go into the box with a mentality that I am going to hit the ball and put it in play. I’m going to try and be a base runner and let someone behind me put it in play,” Morrison said.

Springwood travels to Lagoon Park in Montgomery Thursday for its regional tournament that will decide the state seedings.

The Wildcats will face Glenwood in the first round at 1 p.m. CT.