Sprucing up the halls with local photographs 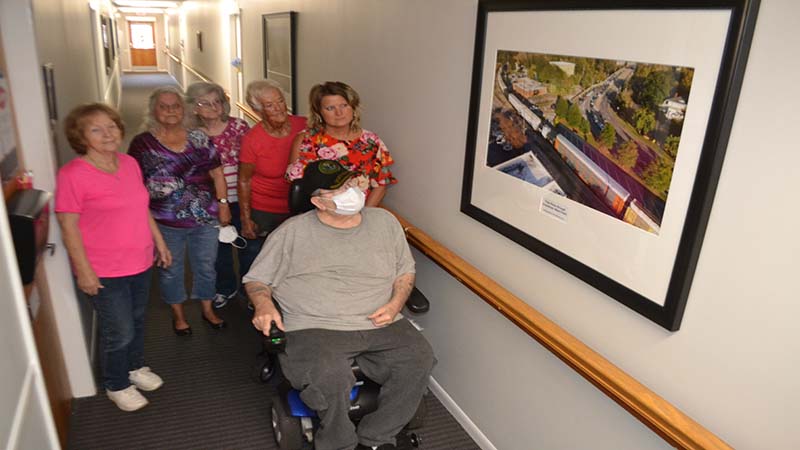 VALLEY — The Valley Lions Club recently commissioned local professional photographer Penny Bowie to do a series of photographs of familiar buildings, churches and scenes from one end of the Valley to the other. Those photos have been matted and framed and now on display in the hallways of Sylvia Word Manor’s four units. A total of 47 seniors live in the Housing and Urban Development (HUD) apartment units.

“These photographs are so beautiful!” said one resident. “The photographer really did a great job.”

Some of the photos were shot from a drone and show a perspective of a familiar scene that can only be seen a few hundred feet off the ground.

“I spent a couple of hours with her one afternoon, taking her to different places I thought would be interesting to photograph,” said Lions Club President Phillip Sparks. “I am really pleased with the job she did. There are 32 large photographs on the hallways at Sylvia Word. It adds a nice touch to the buildings, but what’s most important is that the residents really like it.”

Some of the scenes photographed by Bowie are around West Point Dam and Lake. There’s a really nice aerial view of the dam and powerhouse that was photographed from the drone. There are also some scenes of the sailboats at Southern Harbor Resort and Marina, and of course, the red and white lighthouse.

Coming down river, there are large photos on display of the 1914 railroad trestle (when a long freight train was passing, to boot), the John C. Barrow Bridge (one looking north and including the railroad trestle) and one looking south showing the west bend of the Chattahoochee, which gave the city its name in 1832. Sparks likes the photograph he calls a traffic jam. It’s a view from a drone and shows a long line of cars backed up when a slow-moving freight train is rumbling through town. Almost anyone who has ever lived in the Valley has been caught many times in those long lines waiting on a train.

A photo taken in downtown West Point shows the Scroggs Building, located on the southeast corner of the intersection of West 3rd Avenue and West 8th Street. There’s also a large, framed photo of West Point Depot. A drone view south of West Point in Harris County, shows the shoals and white water along Flat Shoals Creek. On the north side of town, there’s a spectacular drone shot of Fort Tyler looking south and a large photo of the West Point Woman’s Club, which was founded in 1869 and chartered in 1912.

The Lanett photos feature the downtown fountain with the 1906 Fraternal Hall & Stores Building in the background, Little Nadine’s Doll House in Oakwood Cemetery and the Lafayette Lanier Monument across from the Lanett Mill site.

One of the Valley scenes is on display in the Sylvia Word Manor Community Room. It shows the apartment complex from several hundred feet up.

A really breathtaking picture is a drone shot showing a close-up view of the steeple at Langdale Methodist Church with many Langdale landmarks in the background, including the Lafayette Lanier School and theater, Langdale gym, the Iron Bridge and the mill site. Sparks said that one of his favorite vantage points is from the steps of Langdale Theater. “It’s one place where you can see the front door of the Methodist church, the gym and the Baptist church,” he said.

The new photo collection has been a big hit with the residents of Sylvia Word Manor and something for people to see when they come to visit friends and relatives who are living there.

Many of the residents are enjoying being outside their apartments on warm, sunny days and working in their flower gardens. One of the best ones is near the front and has water flowing from a fountain.