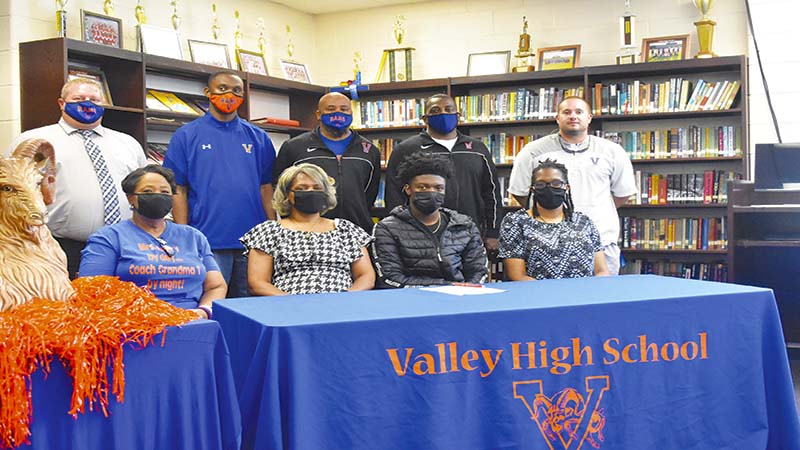 For the past few years, it was evident that Valley senior Quez Trammell was going to play in college, as he was usually the most athletic player on the field, court or track that he was competing on. The question was what sport would he continue at the next level.

On Tuesday, he signed with Gadsden State Community College to continue his basketball career.

“I would like to thank God for guiding me to this point today. I would also like to thank my mother, grandfather, my grandmother and my aunt for pushing me to be the best student-athlete that I could be,” Trammell said. “I would also like to thank coach [Marshon] Harper and, his wife [Jemeka Harper], for helping me through this recruiting process. Last but not least, I would like to thank the best agent I could ever ask for Mrs. [Tamalita] Autry and my teammates, who pushed me to be the best teammate I could be. Even though we had our moments, we loved each other like brothers.”

Trammell had more than 20 offers to play football or basketball, but he chose Gadsden because of the environment and the chance for a reunion with one of his former teammates.

“I went to go visit and I liked the vibe of the players,” Trammell said. “My buddy, Kin-Kin [Kintavious Dozier], is going there, so that just sealed the deal right there.”

Trammell is the second player to sign with Gadsden State this year, as Lanett’s Kintavious Dozier committed on Sunday. The pair were teammates for two years at Valley High School before Dozier transferred to Lanett.

When they get to Gadsden, the pair will be roommates.

Trammell was Valley’s go-to player for the entire season, as he averaged 21.6 points and 9.6 rebounds a game. This season Trammell scored his 1,000th point, finishing his career with 1,122 points.

On the football field in the fall, Trammell finished with 25 tackles and one interception in five games from his safety position. He added 148 yards and three touchdowns on just six receptions on offense.

“You take Quez, and you look at him his senior year versus his junior year, he really bought into the process of becoming a student-athlete and what it was going to take as far as working on the field, in the weight room and those things,” Valley head football coach and athletic director Adam Hunter said. “It’s a true testament of him signing a scholarship today of the character that he’s built while he’s been here at Valley High School. We’re excited for him. We’re really looking forward to what the future holds for him.”

Overall, his passion for basketball led him to continue his basketball career instead of football.

“Basketball has always been where my heart is at,” Trammell said.

Trammell stepped up as a leader in his final year at Valley. The Rams had three seniors, but almost every other player on the team was either a freshman or a sophomore that didn’t have varsity experience.

In some of the biggest games of the season, Trammell stepped up and led by example. In the seven area games the Rams played this year, Trammell averaged 21.3 points a game, helping Valley finish second in the area during the regular season.

“I think he did a better job in a leadership role. He helped the younger players come on and the other two seniors on the team, he helped them become players also,” Harper said. “He played well against good competition. The better competition we had, the better he played. He’s just an unbelievable player.”