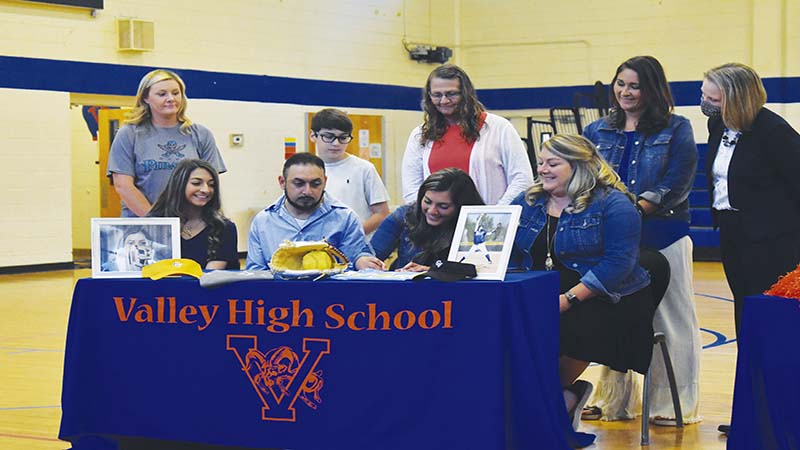 Valley softball player Kaylin “KK” Green made her dream a reality on Tuesday, as the senior signed a scholarship offer with Chattahoochee Valley Community College in Phenix City.

“It’s very exciting because I’ve been working for this my whole life,” Green said.

Green is a standout for the Valley softball team, playing a multitude of roles for head coach Torie Hopkins, including being the team’s ace in the circle.

“KK is an outstanding athlete. She not only works hard on the field but off the field,” Valley head softball coach Torie Hopkins said. “She’s received several scholarships, academic scholarships and several awards through her career playing softball. She always works hard for her team. We’re sad to see her go because she is a great asset on the field. I can pretty much put KK anywhere and feel confident with her at that position. We’re very proud of her and can’t wait to see what she does at CV.”

Familiarity was one of the key reasons Green decided to stay close to home and choose CVCC. Along with the school being less than an hour away from Valley High School, Green will have several of her travel ball teammates joining her in college.

I have a bunch of teammates that are going there, so I know people there and I can get along with them.”

In her six years on Valley’s varsity softball team (as she played as a seventh-grader), Green has played various roles for the team, including first base, shortstop and third base. At the plate, she is the Rams’ cleanup hitter and one of the more consistent bats in the lineup.

“KK has been a pitcher for as long as I’ve been coaching, and she’s an excellent pitcher. She’s one of those that I can put absolutely anywhere, and I feel confident that she is going to do her job,” Hopkins said. “At the plate she’s great, she’s my No. 4 hitter. She truly is one of those great coachable athletes.”

That versatility also stuck out to head coach Steve O’Steen, who told Green her during the recruiting process she could play more than just pitcher while a member of the CVCC roster.

“He said he could really put me anywhere, so I’m not really just a pitcher,” Green said.

Green is one of the few remaining players that played for Hopkins when she took over as the Rams’ head coach. In those six years, Green and Hopkins built a relationship more than just player and coach.

“I feel like she’s one of my own. It’s been an honor to watch her grow and get better. I’m going to be really sad to see her go,” Hopkins said.