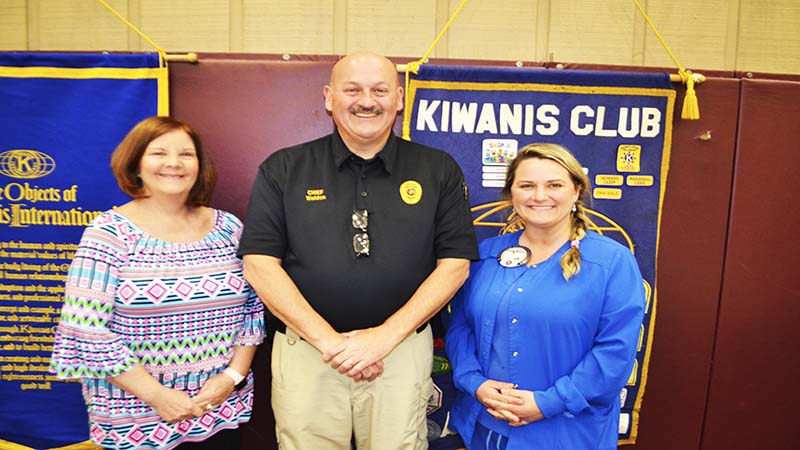 VALLEY — Valley Police Chief Tommy Weldon was the guest speaker at Wednesday’s noon hour meeting of the Kiwanis Club of Valley. He talked about some of the experiences he has had as a police officer and offered his view on two police-involved incidents that recently made national news – the fatal shooting of 20-year-old Daunte Wright in Brooklyn Center, Minnesota and the pepper spraying of a U.S. Army lieutenant following a police chase.

“A lot of people can’t imagine how that shooting took place in Minnesota,” Chief Weldon said. “What a police officer does in the heat of the moment goes back to their training. You know your gun was on one side and a Taser on the other.”

Body-camera footage of the incident shows veteran officer Kim Potter shouting “Taser! Taser! Taser!” while her gun is in her right hand. She apparently mistakenly fires the gun rather than the Taser, ending the life of an unarmed young man who had been pulled over for having an expired tag, according to media reports.

Potter has since resigned from the force and has been charged with second-degree manslaughter.

The Virginia incident took place in December near Norfolk. According to media reports, Lt. Caron Nazario, a man of Latino descent who is black, said that he did not want to stop immediately after seeing the blue light of a police vehicle from behind. He kept going until he could see the lighted location of a BP gas station. Two officers approached him with guns drawn, telling him to get out of the car. When he asked what was going on, one of the officers reportedly told him, “You’re fixing’ to ride the lightnin,” a well-known line from the 1999 movie “The Green Mile.”

The two officers involved in the case are defendants in a lawsuit that has been filed by Nazario.

When asked to get out of the car, Nazario, according to the suit, told the officers he was afraid to get out.

“You should be,” one of the officers reportedly told him.

According to the suit, Nazario was pepper sprayed, knocked to the ground, handcuffed and interrogated. Paramedics were called to treat him for the pepper spraying, and he was released.

Weldon said that a situation like that might have been avoided if Lt. Nazario had the presence of mind to call 911 and explain why he was not immediately pulling over. He could have told a dispatcher that he was looking for a well-lighted place. The dispatcher could have contacted the officers that were following and informed them of that.

Weldon thought he knew what happened in the Minnesota shooting.

“She probably thought she was holding the taser,” he said. “It was definitely a tragic incident.”

Weldon said he could relate to being confused about something in his hand from his time with the Chambers County Drug Task Force.

“Clay Stewart and I got word that there was a suspected meth lab in a hunting camp in a remote area of the county,” he said. “When we got there during the night, nothing was going on. We waited through the night for someone to show up. I was wearing a heavy camouflage shirt, and sometime during the night I pulled it from my waistband and over my belt. Early the next morning, a woman arrived. We saw her reach under the cabin and pull out some kind of container. We approached her to ask what she was doing. I reached for my gun and had a handful of shirt along with the gun. When you do something in the heat of the moment, you may have something in your hand you weren’t expecting.”

Weldon has been a police officer since 1985 and Valley’s chief since 2009. He said that he has seen lots of changes in the equipment used by officers. He said most of it is good but some of it’s not so good. He said that he has never been a fan of pepper spray. As part of an officer’s training, they have to be pepper sprayed before they can do it to a suspect. “It gets all over anyone who is close by, and it’s really bad stuff,” he said. “It’s like being hit across the forehead with a 2-by-4. It will be difficult for you to function for some time.”

Weldon said that tasering is a better way to get someone under control. The effect on the tasered person is temporary, and allows officers to make an arrest before a suspect can draw them into a knock down, drag out fight.

Weldon said it’s no fun to get in a fight with a big, strong man who does not want to be arrested.

He said that he and Stewart had to do that when the Drug Task Force building was located on Highway 431 across from Chambers Academy. It was quite a struggle before the two men could get the suspect on the ground. They were bruised and battered when a third officer showed up and got the handcuffs on him.

”I was as sore as I could be the next day,” Weldon said.

If a suspect wants to wrestle with an officer, the one thing the officer has to be aware of is that he may try to reach around his waist and take his gun.

Weldon said that almost happened to him one time when a man he was arresting wouldn’t go without a fight. He goaded him into a struggle by telling him there was no way he would have ever gotten the handcuffs on him had he resisted. They had gotten to the county jail at the time, the cuffs were off and Weldon was leading him to his cell.

“He reached around behind me to get my gun,” he said. “I had to wrestle with him again.”

That procedure has changed over the years. When an officer now arrives with a suspect, his gun is placed in a locker. There’s nothing for the suspect to fight over.

Weldon said local officers used to carry pump shotguns with them. He said it would really get people’s attention when an officer cocked it. There’s a greater emphasis today on non-lethal means. Shotguns are sometimes used to disperse unruly crowds. The rounds that are fired can be such items as bean bags and rubber pellets.

There are situations where officers have to use some creativity in making arrests. Weldon recalled an incident when they had to apprehend a drunken man in a single-wide trailer who was threatening people with a knife. When they got there, he was standing behind the door brandishing the knife at them. Weldon looked around in the yard and saw a rusty metal chair propped up against a pine tree. He went over, got it and used it to pin the man against the opposite wall when the other officers opened the door. At least that was what he intended to do. When the officers opened the door, the man fell flat on his face, and they were able to handcuff him.

The next day when Weldon reported for work at the police department, there was a poster on the bulletin board with his photo on it and saying: “Sgt. Weldon is now teaching self-defense courses with the aid of a rusty metal chair.”