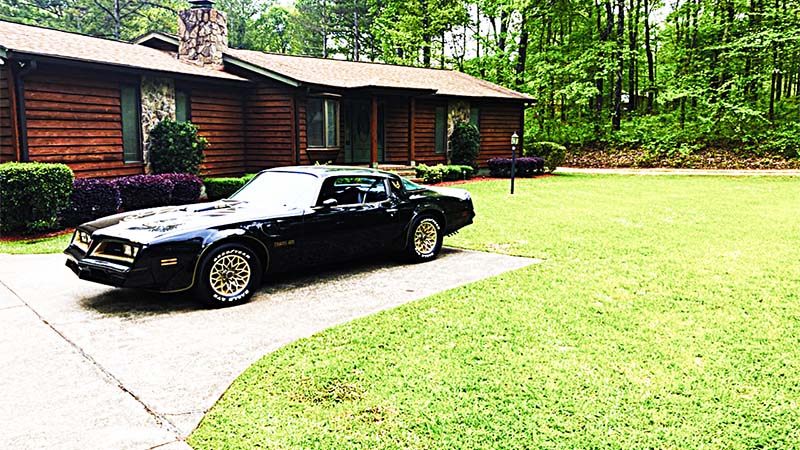 More than three years ago, Scott Willingham was fighting for his life dealing with a rare disorder. Because of the uncertainty of his life, Willingham bought “Dukes of Hazzard” and “Smokey and the Bandit” replica cars to give to his children as a way to remember him. Now cured, Willingham uses his cars to draw in crowds of people so he can speak about his history of addiction.

Next weekend, Willingham and his cars will be in Talladega at the International Motorsports Hall of Fame during race weekend for NASCAR’s Geico 500.

“I’m excited. I called my momma and daddy and told them ‘A homeless meth addict repents and now my story is going to be over at Talledega,” Willingham said. “That’s only God. That’s what he’ll do. He’ll use you if you’ll go.”

In the late 1990s, Willingham was living in Roanoke, where he met his wife, Jamie. The two were married in 1997 and opened Scott’s Auto Sales in 1998.

In 2000, some of Willingham’s friends introduced him to meth, which caused his life to spiral.

“The Lord spoke to me and told me the first day I bought it ‘you’ll lose everything,’” Willingham said. “Six months later, I lost everything. I lost my home, I lost my business, my wife and youngin’ left. I lived that life from 2000-01. I was in and out of jail. I was a bad addict.”

For the next eight years, Willingham was fighting his addiction, was in and out of jail and was on and off with his wife.

In December of 2008, Willingham was in jail for his son’s birthday, when he decided to make a change in his life.

“I was looking out the cell window and I said ‘Man, it’s my little boy’s eighth birthday. Lord, I’m a good daddy in jail on his birthday,’” Willingham said.  “The next day, I look out the window and there are youngins’ and mommies and daddies decorating around the house for Christmas. I said ‘Lord, if you let me go home to my wife and youngin’, I’ll change my life. A couple of weeks later, the judge called me across the street and let me go free because I told him that I was going to get my life together. He gave me a chance.”

The Sunday after getting released, Willingham went to church in an effort to turn his life around. In 2009, he opened Scott’s Towing.

Four years ago, Willingham started to feel the calling to talk about the dangers of addiction and his past.

“God told me that I have a plan for you,” Willingham said. “He said ‘I want you to slow down and spend more time with your family and be a speaker about addiction.’ I said ‘I’m not doing that. I’m not getting out here and tell everyone that I smoked meth and ruin my business.’”

Six months after he refused to be a speaker, Willingham was diagnosed with fibromuscular dysplasia (FMD), a rare disorder where blood vessels become twisted, which affects blood flow. FMD can’t be cured.

After his diagnosis, Willingham was fighting to stay alive for the next seven months. Because he wasn’t sure how long he was going to live, he told his three children that they could have a “movie car,” as Willingham already owned replicas of the Trans Am and Jackie Gleason’s police car from “Smokey and the Bandit.”

“I told my wife, that these cars go to the kids if I don’t make it,” Willingham said. “I told them ‘do not sell your car, so if daddy doesn’t make it, you’ll have something daddy gave you.’”

Throughout the seven months Willingham was fighting for his life, he continued to pray to God, asking for healing. Willingham said God told him to put on a car show for a local boy named Maddox Cannon, a four-year-old that was diagnosed with sensory processing disorder, septo-optic dysplasia, epilepsy and hydrocephalus — a condition involving an accumulation of fluid in the brain.

“Then, he showed me a couple of other things I could do, and I did them. He started giving me strength, so I could go out and drive a little bit,” Willingham said. “Then, I said ‘Lord, please heal my body. I’m in so much pain.’ ‘Go speak about addiction’ [God replied], so I spoke at a church in Roanoke. I went to the doctor the next day, and I’m sitting on the bed and said ‘I’m healed by the grace of God.’ He [the doctor] said ‘Yes you are. According to your tests and scans, it’s all gone.’”

Since recovering from FMD, Willingham has been speaking about his history with addiction using his movie replica cars as a way to draw in crowds.

Because he was going and preaching to people, Willingham, along with the late Charles Story, founded Missiles for Christ Ministry, which helps people recovering from addictions.

“When God healed me, I was at church one day, and I said ‘God is using me as a missile.’ I meant to say vessel but I said missile,” Willingham said. “I went to Mr. Charles Story and I said ‘I messed up.’ He said ‘you’re a missile, you’re blowing up demons.’”

Willingham and Missiles for Christ have been working to put a 40×60 foot cross along Interstate 85 southbound on mile-marker 75.

“We’re going to put it up in memory of Mr. Charles Story and Mr. James Potter, who is the one that built all the crosses in Tennessee,” Willingham said. “We’re doing it for what Jesus did for us on the cross.”