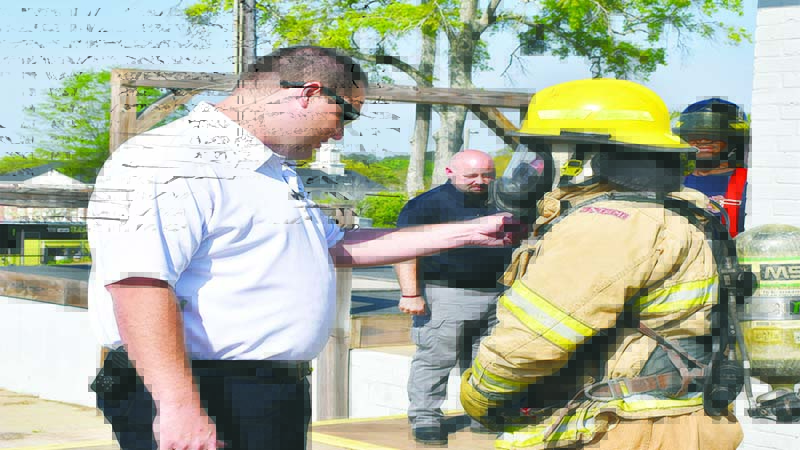 For 31 year old Beulah native, Jacob Geiger, working with a fire department never crossed his mind growing up. Geiger, who is the deputy fire chief with the East Alabama Fire Department, says his original goals differ dramatically from where he is today.

“The original goal was to teach school and coach sports, that was the original plan,” Geiger said.

Those goals started to shift Geiger said when he began volunteering in April of 2007 in Beulah. “I enjoyed the fire department thing, but I kind of was leaning toward law enforcement,” Geiger said. “I just stuck with the fire service, and I’ve been blessed with it.”

Although prior to coming to EAFD, Geiger was fire chief in Beulah for four years, and he checked off the fire chief box early on, Geiger says in time he would like to be fire chief again — possibly with EAFD. But, Geiger says he is patient and will wait as long as it takes.

“If it happens, it happens,” he says, “I would like to be the next fire chief here, you know in time, however long it takes for Chief Pickard to retire.”

Geiger says by far the best part of working in fire services is the people.

“I love my guys and girls here, they are my second family,” Geiger said. “I tell them all the time — I love you, mean it.”

On the other hand, Geiger said, the things that firefighters see on a daily basis is the toughest part of the job.

“The worst part of the job is you do see a lot of bad things, you see things that the normal person’s not going to see,” Geiger said. “You see that, you see it affects your people. So, then you’re trying to figure out how not only to take care of yourself, but what can I do to take care of my people that are hurting, and I think that’s probably the worst part.”

Geiger says the most interesting thing for him is being with EAFD during their growth and transition.

“You know, the fire department went from only going to fires and wreck calls to running full ALS [Advanced Life Support] calls to having the training facility and training center,” Geiger said. “And then to just see the overall area just change from the old small town, mill-town type area to where you are seeing just a lot of growth in the cities and developments. For me, that’s been interesting just to see the almost overnight change.”

Outside of the firehouse, Geiger is married with a five year old son and another child on the way and is an avid hunter.

When he is not out in a blind, Geiger said he is honing his barbecue skills.

“I love just hanging out with friends and family, throwing something on the smoker and letting it smoke,” Geiger said.

Geiger also said he may want to try his hand at competition barbecue.

“I joke with my wife all the time — that’s my retirement plan — I want to retire and get into the whole competition barbecue,” he said.