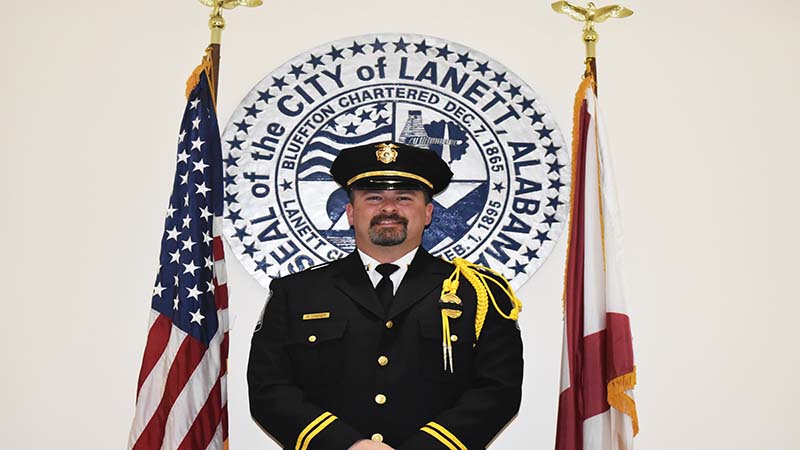 For Lanett Police Departments Patrol Commander Capt. Richard Casner, law enforcement was always something he was interested in pursuing as a career.

“I’ve always had the kind of itch to do it,” Casner said.

Casner was born in Reno, Nevada and grew up in Buhl, Idaho, a small town about two hours southeast of Boise. Casner spent some time in metal fabrication and when the economy took a dive in 2008, Casner said it prompted a move. Casner landed in Chambers County because his wife had family in the area.

Once he arrived in Chambers County, Casner decided to take the chance and get into law enforcement and has been here ever since. Casner moved through the ranks at a quick pace.

“I got out of the academy, three months later I was put into investigations, which is crazy,” he said. “So, in 11 years, I went from rookie to captain.”

In his current role with Lanett Police Department, Casner oversees operations and communications.

“I make sure all the training is lined out for everybody,” Casner said. “I do a lot of communications with the news media, with lawyers from both sides — prosecution and defense.”

He also is charged with internal investigations.

“I also do all of the internal investigations — chief, and I do them together but I am the end for the investigation on what’s decided,” Casner said.

Casner said the community is what he likes about Chambers County.

“Our community for the most part, has rallied around us — they allow us to do the job we do,” he said. “We have so much support to do the things we do.”

Casner is currently about one semester away from his associates degree and his wife is also pursuing a degree — with two semesters left and will become a teacher — while raising two children. Casner’s daughter plays club soccer with the Columbus Red Stars, so he spends a lot of his free time traveling for soccer matches. Casner’s son is also starting baseball so trips back and forth to the ball fields occupies Casner’s free time.

Casner does have aspirations of becoming a chief one day and says current chief Johnny Wood has helped prepare him for the role.

“Our chief has been really good about taking me to conferences, sending me to get my executive hours and stuff like that, so that when I do decide to make that step I will already have the certifications in place,” Casner said.

Casner said he is a little old school in the way he thinks, but remains open minded.

“I’m a little old school,” he said. “I’m open minded as well because I understand that we’ve got a lot of young guys that are coming up young guys and ladies, and they think differently than I do, and they think differently than even somebody that’s five years younger than me does. It’s progressing, and there’s nothing that we can do about that. I’ve learned enough in my career to know that that change is coming. The whole world is changing. I have to adapt to that. I can’t try to make them adapt to me because it’s not going to happen.”