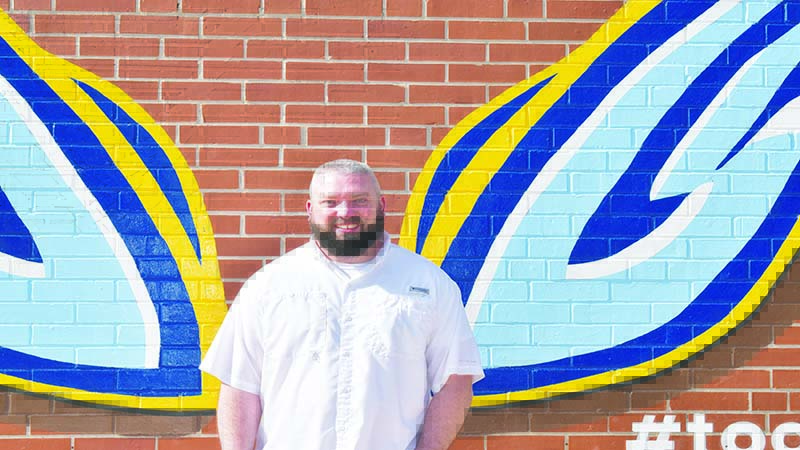 Rusty Hassell, Point University’s Dean of Enrollment Management, is originally from what was then called Atlanta Christian College in East Point, Georgia.

Hassell was a son of a preacher who took him and his family on a few journeys during his childhood. That was mostly in Mississippi and Florida and then back to Georgia.

“I’m a preacher’s kid. So, we hopped around to different churches for a while,” Hassell said.

Although both his parents were alums of Point, Hasell began his journey at a small bible college, moving on to Daytona State and eventually landed at Point to complete his degree.

Hassell began his working career at a technical school in Daytona, but he said he did not believe in what he was doing.

In 2011, Hassell began his career at Point as the athletic admission counselor about the same time the school was making its transition to where it’s located now.

“We had just announced the name change, and they had announced adding some new athletic programs including softball, cheer, football,” Hassell said.

In his current role, Hassell oversees all the enrollment from Point’s dual credit enrollment and their teams in Peachtree City and Savannah, along with the university’s online graduate program.

With the experience Hassell had garnered through high school and college, Hassell says he had aspirations of entering into some type of sports information role, but credits God for bringing him to where he is today.

“It’s just amazing how God works because I had all these different skill sets, but couldn’t really figure out how to embrace them all. Then, I got hired as an admission counselor up here, I was doing parent newsletters and writing articles,” he explained. “Using my journalism, I was a preaching major for three years, I was doing public speaking, which I was totally prepared for that and then the business structure, like having to work on budgets — it’s just amazing how God wound all those different experiences.”

Hassell was also placed on a task force put together by the school to determine how the university should proceed through the pandemic. As a result of his work on that task force, Hassell says Point University President Dean Collins appointed him head of Point’s Care and Advisory Board.

Hassell said he enjoys the relationships he’s formed with his teams and students, although he says his current role does not allow for as much student interaction as it once did.

Hassell currently resides in Valley, and said it reminds him of Deland, Florida where he once lived. The melding of the college and Valley is something he has enjoyed seeing over the years.

If you ask Hassell where he sees himself in five years, he will tell you that he didn’t see himself where he is today and that he believes in what he is doing.

“I plan on staying here and embracing that we have some great stuff coming and new opportunities,” he said.