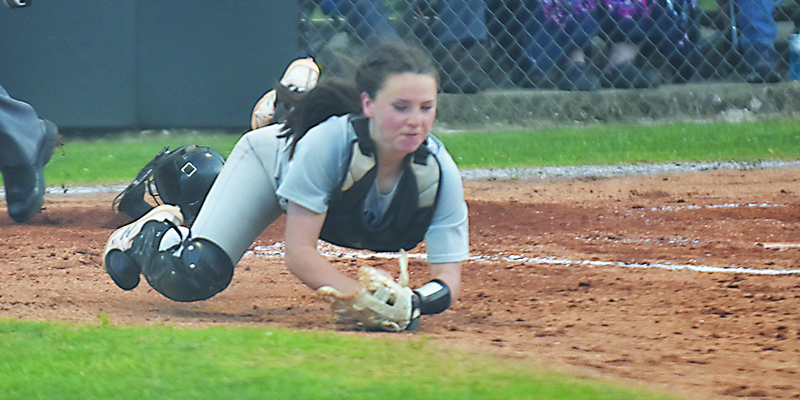 For most of the second part of its season, the Beulah softball team has been tough to beat. The Bobcats have the ability to score quickly to start a game while pitching and defending to hold onto those leads. They showcased that ability in their three games in Montgomery, winning by 10 runs in the first game, but also squeaking out a pair of wins against two of the tougher 3A teams in the state.

That ability starts at the top of the lineup and behind the plate with freshman Abrianna Green.

“She’s a competitor, she’s an athlete and she’s a winner. The combination of those three things, that’s her,” head coach Stan Pepper said. “I have all the confidence in the world in her. She’s probably one of the hardest workers. She comes to my pe class every day and hits. I know that when I put her up there, we have a high chance of her getting on base and making something happen.”

Early in the season, the Bobcats were struggling defensively. The team was struggling to live up to its standards defensively. To boost the team’s overall defensive ability, Pepper moved Green behind the plate permanently, something that has boosted the overall team defense.

“She’s gotten better every game in all aspects from a catching standpoint,” Pepper said. “She can play any position that we need her to play in, and we needed a catcher. When we finally decided to put her there on a more permanent role, it just put the pieces together. AG is just getting better every game. To be honest with you, this past week, I didn’t see a better catcher down there at regionals. That’s a compliment to her, but she works at everything she does. She’s focused on everything she does and just works. She comes to practice every day ready to work. She comes to pe every day ready to work. She’s just a worker, and when you add in the fact that she does have athletic ability, it just raises her to the next level.”

This season, Green has made strides behind the plate, as this is her second full season playing catcher in her life. While she has gotten better at the finer points of catching, most notably framing, Green is constantly making plays, diving for short pop-flys or framing a strikeout to help her pitcher.

“Cathing is kind of new so developing into a good starting catcher is a big thing for me. It’s something new and it’s something different from the infield or outfield,” Green said. “Leadoff, I’m finally starting to have power behind my hits and actually being productive at the plate.”

While Green was on the varsity a year ago, Beulah’s season was cut short, taking away valuable experience for the now freshman.

“Going into it, I knew that I would have to put a lot of work for the team. Being so young, I know that I have a lot more to grow with the team,” Green said. “It’s good knowing that I have people behind my back, either in the rest of the lineup or in the field while I’m catching. I know that they’ll be there to help the team out.”

“Last year with COVID and everything, we had confidence in her but she had to realize that she could play at this level. We didn’t get many games in, so early in the year, it was just a confidence thing, and you could see her confidence building at the plate and behind the plate. She started understanding what we wanted from her and she started having confidence in her ability to throw down and block plays. She’s really become a leader. She’s calling plays. She knows what I want before I have a chance to call it. She’s turning into a leader, and it’s just amazing for her to be just a ninth-grader and to be playing at the level she’s playing at. The sky is the limit for her.”

The last time she suited up for the Bobcats, Green was behind the plate in the 3A Eastern Regional Championship, where junior Katie Morris threw a no-hitter.

“It was really cool. We were definitely there for Katie as she was doing her whole thing,” Green said. “It was pretty exciting because you’re just framing the last strikeout of the game and going crazy. We all just met up on the mound. It was the best feeling ever. Just knowing that we were all there to support and we all worked together as a team to win was big.”