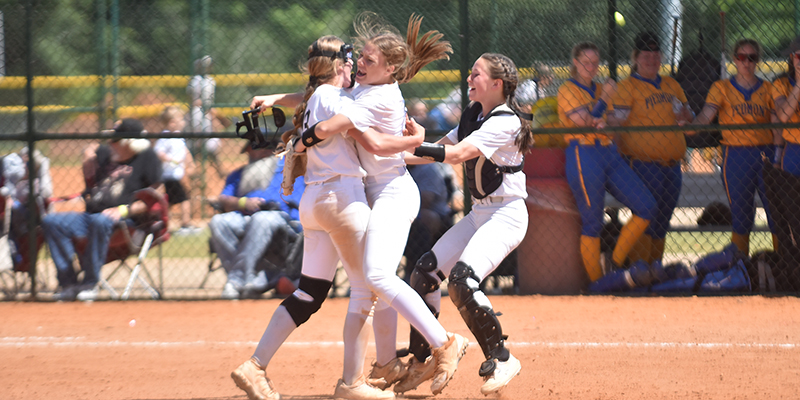 The Beulah softball team is moving on.

After winning its first game of the state tournament against No. 2 Houston Academy, Beulah fell to No. 1 Prattville Christian 2-0, sending it to the loser’s bracket to face Mobile Christian.

The Bobcats slipped past Mobile Christian, winning 1-0 to advance to the third round of the loser’s bracket.

Beulah’s bats were rolling against the No. 2 team in 3A in its first-round matchup. After allowing the game’s first run in the second inning, the Bobcats scored four consecutive runs to take a three-run lead that proved to last for most of the game.

Trailing by run in the second, Beulah put its leadoff hitter on base. With one out and a runner in scoring position, junior Kassidy Kirby lofted a ball to left field, clearing the fence for a two-run home run to give Beulah the lead.

With two outs in the third, Beulah rallied for a single and a walk to put two runners on base for Kyleigh Morgan, who drove in the pair of runners with a double to center field.

After giving up a pair of runs in the top of the fifth, Beulah answered with a three-run bottom of the fifth, highlighted by an RBI double by Katie Morris and a two-RBI single by freshman Anna Gray.

Beulah held on to a two-run lead in the top of the seventh when Morris got the Houston Academy hitter to hit into a game-ending fielder’s choice, stranding two runners.

After holding on to its win against Houston Academy, Beulah was once again up against one of the toughest tests in 3A, No. 1 Prattville Christian, who had just blown past Fyffe in the first round.

The game was a rubber match from the start of the game, as the teams combined for one hit in the first two and a half innings.

In the bottom of the third, Prattville Christian struck for the game’s only runs.

The Panthers led off the third with a single to up the middle and advanced the runner with a perfectly executed sacrifice bunt. A single put runners on the corners for the Panthers No. 2 hitter. On the second pitch of her at-bat, the runner from first swiped second to put two runners in scoring position. A Beulah error scored the first run of the game, while a single to left drove in the second run of the game.

Beulah had a shot to strike back in the top of the fifth, starting the inning with a double, but the Bobcats failed to score in the frame.

It was a pitching duel in the Bobcats win-or-go-home game against the Leopards. Morris, who had already thrown 14 innings on the day, was dominant. The junior scattered five Mobile Christian hits while striking out three hitters, throwing her first shutout of the tournament.

The Bobcats scored the game’s lone run in the top of the sixth inning.

After a groundout to start the frame, freshman Abrianna Green drew a nine-pitch walk for a rare baserunner. She advanced to second on a passed ball, setting the stage for sophomore  Savanna Clements. Clements delivered with a two-out single to center field, scoring Green from first.

Beulah will rematch Houston Academy at 10 a.m. CT on Saturday in Oxford. If its wins, Beulah will play again at 12:30 p.m. CT.