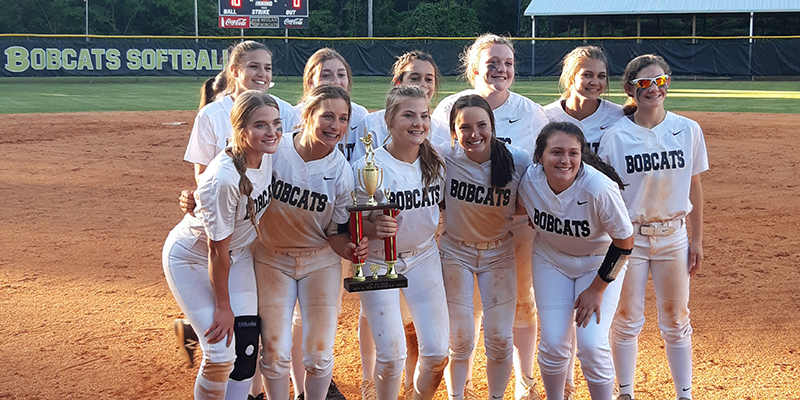 The Beulah softball team grabbed the lead in the top of the first inning against Reeltown and steadily increased its lead for the remainder of the six-inning game to claim the 3A Area 7 championship on Friday 10-0.

Friday’s area championship win was the second in the past two seasons.

Beulah scored most of its runs by taking advantage of Reeltown’s mistakes.

The Bobcats took the lead with just one out in the first inning. After drawing a walk, sophomore Savanna Clements advanced to second on a fielding error by the Reeltown shortstop. The error allowed the ball to get all the way to the fence, allowing Clements to score. Freshman Elizabeth Hancock tacked on the second run of the inning with an infield single, scoring Brandy Phillips, who stole two bases in the inning.

Beulah scored three runs in the second inning. The first run scored on a passed ball, which allowed Kyleigh Morgan to score from third. An error allowed Kassidy Kirby to score from third on the next play, while a groundout to second base scored the final run of the inning.

Beulah tacked on four more runs in the fourth inning. With one out and the bases loaded, a wild pitch scored two Bobcats. A second wild pitch in the inning scored the third run, while a passed ball scored the fourth and final run of the frame.

Leading by nine after five innings, Phillips bunted down the first baseline for a sacrifice bunt, scoring the game’s final run.

Phillips started the game, throwing the first 3 ⅔ innings. She struck out six batters while allowing just two hits during her outing. Morris finished the game, striking out seven batters in 2 ⅓ innings.

The Bobcats will play Wellborn in the first round of the 3A East Regional on Friday at 9 a.m. CT in Montgomery. The regional tournament, which is a double-elimination tournament, will be played at Lagoon Park.