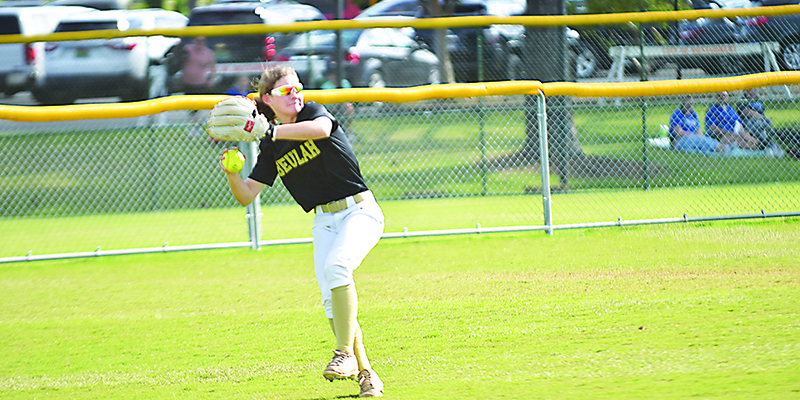 One of the most helpful traits for a coach is having a player that can play multiple positions. For Beulah head coach Stan Pepper, he has that in sophomore Savanna Clements.

“Savanna is the ultimate team player. She’s the ultimate utility player,” Pepper said. “The only place I haven’t put her is in the circle, but I guarantee you that if I put her in the circle, she would learn how to pitch. She can play anywhere on this field at a high level. If she’s playing at a position, she’s playing at a high level. I’m just so proud of her because she’s gone through a lot, just moving from place to place. I put her at center field two or three years ago,  because you have to be solid up the middle, especially at this level. If you don’t have a center fielder,  you’re in trouble. When we moved her to center field for the final time this year, defensively as a whole, we got better. She makes the team better being in center field. I can put her anywhere and know that position is going to be played at a high level.”

This season, Clements has played the outfield, where she is for the rest of the season, second base and caught, starting the year rotating between second and catcher.

Since moving her to center field, the Bobcats have solidified their defensive lineup, which rarely commits an error.

“It was different. I  usually play infield, so it was hard going to the infield to catching and now to the outfield,” Clements said. “You just adapt and adjust.”

Clements is the Bobcat’s three-hole hitter, allowing her to knock in runs or move runners around for the middle of the lineup.

“She’s a good line-drive hitter. She puts the ball in play and she has a good eye,” Pepper said. “She hits a lot of balls to right-center field, which is hard to defend because when you get up there and people start throwing you outside, you naturally try to pull it. She’s just hitting everything in right-center and left-center. Most of them are line drives. She’s got the power to hit home runs, but her swing is conducive for her to be a line-drive hitter, and she does an outstanding job for us. She is also an outstanding bunter. I put her in the three spot for us, so when we have one or two on, we have the option of playing small ball or just letting her open the bat up and put the ball in play. I know when she gets up there, they’re going to have to get her out. It’s very hard to strike her out.”

In the past two games, Beulah has faced two of the tougher 3A teams in the state, forcing the games to be close (Beulah won by one run against both Piedmont and Pleasant Valley). Though the offense wasn’t clicking as it has been for most of the season, Clements was in the middle of the action in both games. In the Pleasant Valley game, Clements scored Bobcats’ first run, sliding around the Pleasant Valley catcher to score on a bang-bang play. In the Piedmont game, Clements had a big single that sparked the top of the fourth, allowing Beulah to score its only run of the game.

“It was awesome. We [Clements and teammate Brandy Phillips] usually do crazy stuff like that. It was just awesome the feeling that I dove home and it was the tying run, so it was pretty exciting,” Clements said.

In both games, Clements was aggressive and in the Pleasant Valley game it paid off, allowing her to score the tying run. Clements also starts on the Bobcats’ basketball team, where is constantly playing aggressively. On the court, she is constantly diving for loose balls or drawing a charge to create a turnover and spark the team. She shows that same aggressiveness in softball.