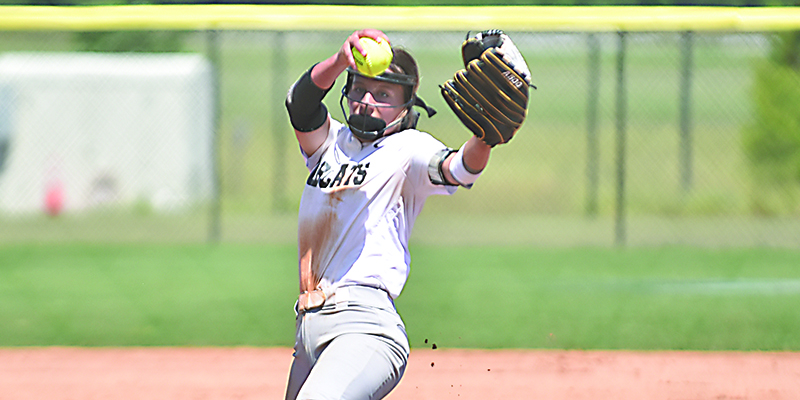 The Beulah softball team went on a fantastic run this season, finishing as the No. 4 team in 3A. The Bobcats finished the season 26 wins, finishing 17-1 outside of tournament play in the regular season.

In the middle of Beulah’s success was sophomore Brandy Phillips, who has been named The Valley-Times Player of the Year in softball.

Phillips had an unbelievable sophomore year for the Bobcats. As the team’s No. 4 hitter for most of the season, Phillips hit .544 with an on-base percentage of .577 while hitting 12 home runs, seven triples, 10 doubles and 49 RBIs. She also stole 26 bases, finishing with a 92 stolen base percentage.

“She’s been special ever since I started coaching her as a seventh-grader,” Beulah head coach Stan Pepper said. “Brandy is one of the hardest workers that I’ve ever been around. I can call in all the other coaches and ask them who is the most talented player on this campus, male or female, and they’re going to say Brandy Phillips. She has been given God-given ability and she’s very humble. She knows she’s good, but she also knows that she has to keep working to get where she wants to get to. She also cares about the other girls on the team. They love each other, and Brandy is a huge part of that.

While all of Phillips’ stats are outstanding, one of her more outstanding stats is the number of times she struck out. She finished the season with two strikeouts in 39 games. Entering the postseason, she had struck out just one time.

Along with her middle-of-the-order presence, Phillips is a stellar defender from her shortstop position.

“I’ve always practiced and practiced and practiced. I just think whenever the ball is hit to me in practice that I’m in a game,” Phillips said. “I go to practice like I’m playing in a game. I don’t want anything to get past me. You have to practice every day and give it your all. As a young softball player, I was always better in the field. I was never an amazing hitter, I would put the ball in play, but it was never very good. Whenever I would get out on the field, I knew that I could make a play. I’ve always enjoyed it. Fielding groundballs is just fun for me.”

During practice, Pepper or assistant coach Jamie Carden’s main goal is to get a hit past the sophomore, who normally makes the play in practice, just as she usually made the play during the game this season.

“In practice, me and coach Carden try to get balls past her,” Pepper said. “The only way we can get one past her is to hit it right up the middle or where our third baseman should be. We went to Southern Union and worked out on Thursday before we went [to the state tournament], and I was hitting them to her, and she was diving all over the place. I hit one to left field, I hit a pop fly where the left fielder should be, and she went out there and got it. I wanted the Southern Union coach to see her mobility. She’s special.”

Phillips also pitches for the Bobcats. For Pepper, he feels like he has a No. 1A pitcher in Katie Morris, who has already committed to pitch in college, and a No. 1B pitcher in Phillips. This season, Phillips threw 63 ⅔ innings, finishing with a 2.40 ERA. She struck out 76 batters while allowing just six walks while being limited with a back injury for most of the season.

Late in the year, Phillips’ father was added to the Bobcats’ coaching staff, working alongside the pitchers. Phillips learned how to pitch from her father.

“I think it’s pretty neat, knowing that I never have had pitching coaches and hitting coaches. My dad has been that person for me. He has taught me everything I know,” Phillips said. “Being able to step up and be a leader on the team, I would give it all to my dad. He has just done everything for me. I think it makes him proud, and it makes me proud.”

“I think it’s kind of natural for me,” Phillips said. “I don’t like to play individual sports. I know that even if I’m doing bad, there are other people that aren’t doing bad. I know that I can encourage them even when I’m not doing my best. If I encourage them, I know they can pick me up or pick any of the other team members up. I know that I have younger kids watching me. Naturally, I’ve wanted to make a difference in their lives. I want to show them that you have to be vocal and be a good teammate. I don’t want to let other people down. I think cheering other people on has a big role on how they play. You can’t discourage people, you have to build them up.”

Beulah will return all of its players from this past season next year and will gear up for another run to Oxford, with Phillips in the middle of the action.

“I’m very fortunate that she is on our team, and the good thing is I have her for two more years,” Pepper said. “If she’s not a D-1 player, I don’t know what one is.”