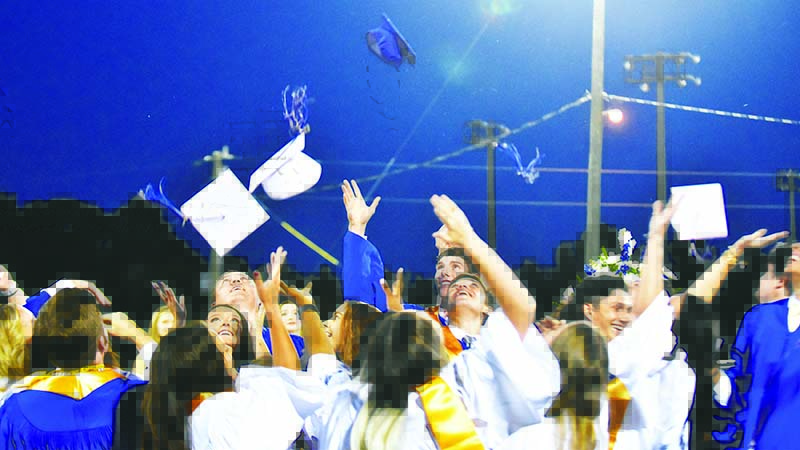 On Thursday, the 2021 Chambers County senior class was able to walk across the stage and receive their diplomas, as Chambers Academy graduated its 52nd senior class on Torbert Field.

Chambers graduated 23 seniors, eight of which were CA originals, meaning they went to CA from K-12.

“For some of us, this journey started years ago here in daycare. For others, this journey began a little later,” SGA President and Mr. Chambers Academy Jacob Oliver said. “In the end, we have a graduating class that is diverse as it is the same. Diverse in the fact that we all have different strengths, ambitions and talents. Similar to the fact that we are all Chambers Academy Rebels at heart. There have been many twists and turns along the way. We have relied on each other to get through some tough times and celebrated the happy times together. It is a wonderful accomplishment that each of us has made it here today.”

The 2021 senior class will go down in Chambers Academy history for several accomplishments in their four years of high school. The athletes in the class have played for numerous state championships, winning two football state titles, while finishing as runners-up in two football, three basketball (one girls’ and two boys’) and two volleyball championships. Three of the seniors will play college sports as well.

Every senior in the class was accepted to college. Eighty-three percent of the seniors are in the school’s Beta Club.

The class received $1.78 million in scholarships.

In her college and career prep class, Career Counselor and Admissions Director Emily Milford has her students write a senior paper, which is a reflective paper where the seniors talk about their time in high school. In the paper, the students are required to write about the legacy they are leaving at the school.

The excerpt that Milford read at the ceremony talked about how the senior class was leaving a leadership legacy.

“If there is any type of legacy that I would like to leave at Chambers, it would be leadership qualities. Leadership is one of the best qualities to have in my opinion because leaders don’t get in trouble in school. Leaders don’t backtalk or smart off to teachers or coaches,” the paper read. “Leaders influence others to be better. Leaders always do the right thing even when no one is watching. Leaders lead by example, that is what makes a program successful. A leader can’t lead on the field and not care in the classroom. When you have a group full of leaders, everything becomes better.”

The 2021 salutatorian is Dean Sheffield. In his speech, Sheffield talked about perseverance, using the example of Tom Garrett, a history teacher at Chambers Academy.

“Coach Garrett has driven from Montgomery daily since he has been a part of Chambers Academy to come teach for seven periods, just to turn around and do it the next day,” Sheffield said. “Coach Garret has preserved this entire year through a pandemic that was deemed too dangerous for people his age to even go outside. Coach Garrett comes to work every day in an amazing mood, no matter the situation or what is going on in his life. Coach Garrett has become a mentor to me and has become a person that I will tell my future family about for generations to come.”

Abbie Morgan, the school’s valedictorian, spoke about her fond memories during her time at Chambers Academy.

“Some may say that we are about to go 23 separate ways and say our goodbyes, but not this class. We aren’t saying goodbye, we’re saying see you later,” Morgan said. “For 13 years, myself and seven others, it all started in Mrs. Carla’s kindergarten class. Throughout this time, we have watched Chambers Academy grow to what it is today. I mean we are the best of the best from the east to the west. We have watched classmates come and go who we will forever remember and cherish the memories we had with them. Tonight, we finish our time at CA with 15 other classmates that we have become so close to within just a few short years. One thing that we know for sure is that we have made memories that will last a lifetime.”