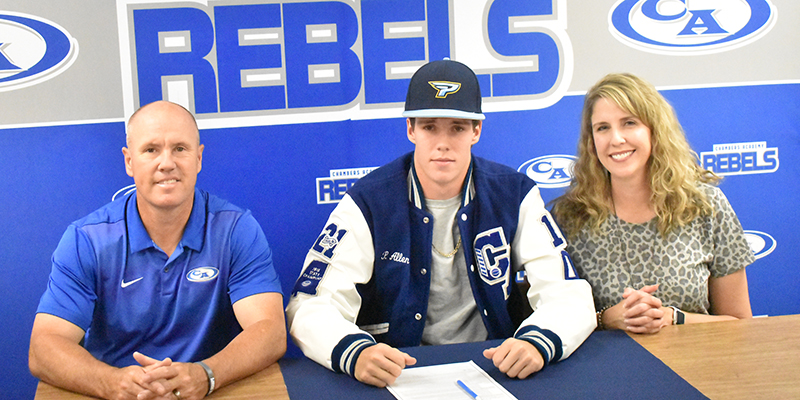 After winning a state championship and finishing as the Alabama Independent School Association Back of the Year, Chambers Academy quarterback Payton Allen signed with Point University to continue his football career.

“I can’t wait to get to Point. It’s been a great career at Chambers but it’s time to take the next step,” Allen said.

While Allen had a few options to continue his career, he chose Point for a couple of reasons, including the proximity to his family and the overall program itself.

“I visited over there and I liked the school,” Allen said. “I liked how the program is ran. I thought it was the best option for me.”

“I’m definitely going to miss it,” Allen said of his time at Chambers. “Just the other day they were getting ready for spring practice. It’s just hard not being out there being able to suit up with all the guys. It’s been a good career, and I’ve had a good time. It’s time to take the next step.”

In his career as a starter, Chambers finished 36-3. He threw for 6,046 yards in his career scoring 66 touchdowns, while only throwing 16 interceptions. Overall, he had 9,116 total yards and 100 touchdowns, both of which are school records

As a senior, Allen led Chambers to nearly a perfect record, losing just one game en route to the school’s second state championship. He was voted the AISA Back of the Year after throwing for 4,388 and 43 touchdowns. He also ran for another 1,179 yards and scoring 12 touchdowns.

“It’s going to be hard to replace his numbers and the things he did at CA,” Chambers Academy head coach Jason Allen said. “He’s had some great teammates along the way, there’s no way that he could have done this without the guys up front, the skill players… we’ve had a lot of really good players at CA. He’ll be the first to tell you that it’s not all about him.

When Allen goes to Point, it will be the first time he has not played a snap of football not for his father.

“I just think about what a good kid he was and a good teammate he was,” Jason said. “He worked hard and had a great attitude. That’s the first thing that I told him you want to be remembered for. You aren’t going to be remembered for all the touchdowns you scored. He really inspired others to play alongside him. They had a lot of faith in him, and he had a lot of faith in them. It was really the perfect end for his career to go out as state champs. I think Point is getting a fantastic football player.”

While he was at Chambers, Allen was a two-way player starting at both quarterback and safety for the Rebels. He will play solely offense at Point.

“It’s going to be different. I can’t wait to get over there and to work,” Allen said.

Throughout his recruiting process, the Point coaching staff told Allen he could get some playing time as a freshman as long as he comes in and works hard, something that he’s used to playing for his father. He could play receiver or quarterback for the Skyhawks.

“I’m going to do whatever they need me to do,” Allen said. “I just want to play. It’ll be exciting.”

Though he has led several players to get athletic scholarships the past few years, Payton’s signing hits closer to home.”

“You take your coaching hat off and think about being the father,” Jason said. “I’m really proud of the decisions that Payton’s made. I think God leads us to certain points in our lives and he has his hand directly on us. I think this is where God wants Payton to be. His mom and I  are excited that he’s going to be close and we can watch him play.  That is definitely a huge advantage of him playing at Point.”