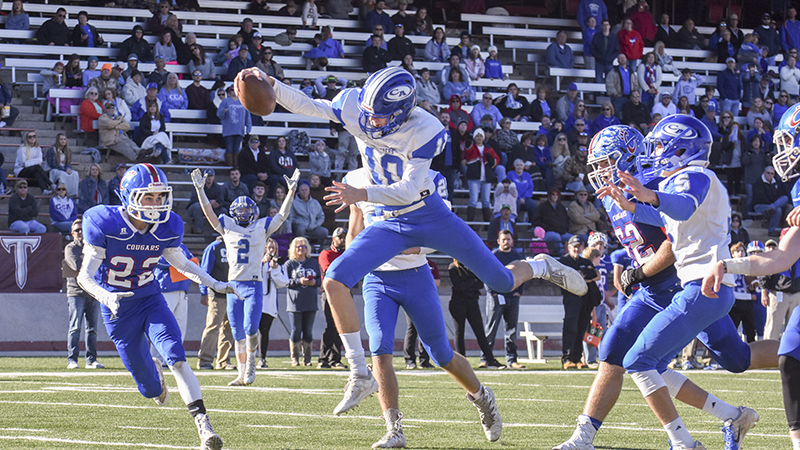 The last time the Chambers Academy football team was together, the Rebels were holding the AISA 2A State Championship trophy after defeating Escambia 36-34 in Montgomery.

The goal of winning the school’s third state championship began Monday, as the team began its only week of spring football.

“They were excited to be back together. The last time that we were together as a football team was at the state championship game,” head coach Jason Allen said. “Some of that chemistry, you definitely feel it.”

Though they lost several starters, the Rebels are aiming to play for the 2A state championship again.

“Our expectations are the same. We want to win again,” Allen said. “We have a lot of players coming back. We lost some valuable pieces, but we’re going to be a very veteran team next year. We have 18 seniors that are playing football, which to my knowledge, that is the largest senior class that I’ve had in my whole career. We did lose some very valuable seniors that will have to be replaced.”

Even though it lost several key starters, Chambers returns a ton of experience from last season’s roster, including its top three receivers, top rusher.

On defense, Chambers returns most of its starters, including its second-leading tackler from a year ago.

“Defensively, we’re going to be a veteran team as well,” Allen said. “We lose four starters on defense. I’m excited for our team. I think we have a chance to be good again, but we have a lot of work to do.”

Since he will have a veteran team, Allen believes he will be able to lean on his experienced players to step up and fill the void left by the graduating seniors.

“Those guys will help us replace those positions because we can take a lot of pressure off the quarterback position because we have so many guys returning,” Allen said. “Every year is a new team, even though you have a lot of the same guys back. We’re going to be dependent on those guys from last year. They know it, and they’re excited about it. We’re going to see if we can get the magic back one more year.”

Chambers will travel to Glenwood on Monday to wrap up its spring camp. It will run drills against the Gators and Lee-Scott.