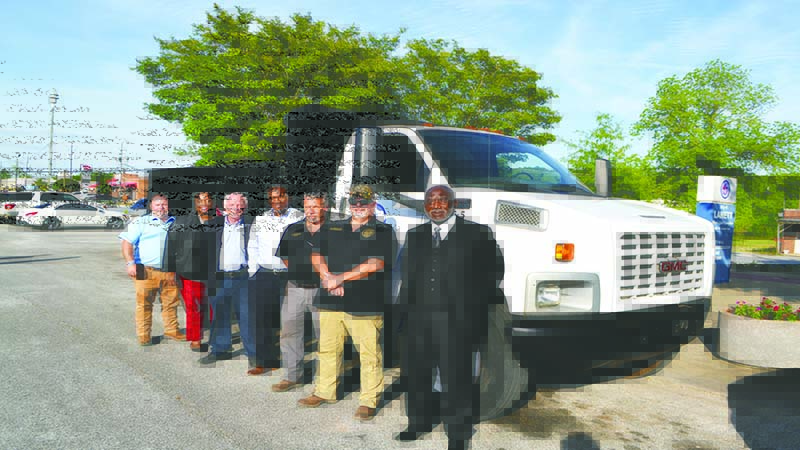 LANETT — In 1976, country music legend Johnny Cash had a No. 1 hit with a humorous song entitled “One Piece at a Time.” It was about a Detroit autoworker who built a Cadillac one piece at a time from parts he swiped from the plant. The guys from the Lanett Utility Department have done a similar thing putting together a dump truck, though none of the parts were stolen.

They were able to put it together from parts they salvaged from vehicles at the city shop.

“We built a new truck out of what we could have scrapped,” Assistant Superintendent Jason Abernathy said. “It’s something of a hodgepodge, but it runs great. We are glad to have it.”

Mayor Kyle McCoy attributes this to having city employees with the skills to take on such tasks. Kevin Crawley and Jeremy Burks are skilled at welding and fabricating, and Donny Mills is considered a first-rate mechanic. Abernathy and Cemetery Sexton Bo Lauderdale brought some additional skills to the task.

The big white truck looks and runs like a brand new GMC. The frame and axle came from a 1992 truck, the engine is from a 1998 model and the hydraulic cylinders from a former limb truck. The cab is from a 2008 truck and the air compressor was once in an ambulance.

The C7500 was produced by General Motors through 2009. It was part of the company’s Topkick Series and was designed for commercial use. It came in three options: standard cab, crew cab and cutaway cab.

Lanett’s new truck will be used in the city’s Cemetery & Grounds Department, which is a division of utilities.

A year ago, the city was down to two dump trucks. The addition of two rebuilt vehicles gets that number back up to four, and the city did it in perhaps the most cost-saving manner possible. The other new truck is a reconditioned ambulance.

“Last August, we were down to two trucks,” Abernathy said. “We were able to convert an F650 ambulance into a dump truck. It and the C7500 puts us back at four.”