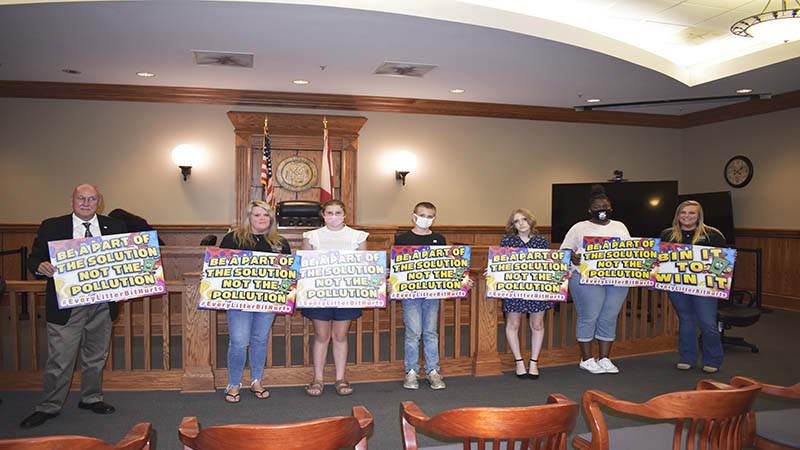 During the Monday Chambers County Commission meeting, Greater Valley Area Chamber of Commerce Executive Director Carrie Royster was in attendance to talk about the new anti-litter campaign in Chambers County. There will be signs popping up along roadways throughout the county that say either, ‘Be part of the solution not the pollution,’ or ‘Bin it to win it.’

Commissioner David Eastridge said he contacted Chambers County Development Authority Executive Director Valerie Gray about his idea of creating signs to install throughout the county discouraging people from discarding trash along the roadways and Gray advised him to enlist the assistance of Royster and the GVACC.

The other winners for ‘Be part of the solution not the pollution’ are: Jonathan Cunningham, Micah Williams, Caidy Williamson, LaChelle Tolefree, Chace Yates and Sha’Nya Smith all from WF Burns.

Kolton Hull of WF Burns also won for his slogan ‘Bin it to win it.’

Royster said they were initially only picking one quote and one hashtag, but then decided on two slogans. “On behalf of the Chamber, we decided to give $25 to each child and Kate [McSpadden], she’s going to get $50 because she is responsible for the hashtag and the slogan,” Royster said.

Eastridge took a moment to talk about litter and how much it costs to have that trash properly disposed of. Eastridge reached out to LT. Tommy High who oversees the solid waste department for the county for some estimates on trash collection.

“People always talk about government officials wasting money. Well how much do you waste as an individual?” Eastridge asked. “The Sheriff’s Department picks up trash and tries to do it throughout the county. On a yearly basis, he [High] spends close to $100,000, just to pick it up.”

Not included in the pick expense, the county has to also pay tipping fees that Eastridge says totals approximately $63,000 a year. “So, in a years time in Chambers County, because of some sorry people that don’t respect us, throws their trash on our roads, it’s close to $163,000 wasted,” Eastridge said.

Eastridge concluded by thanking the parents of the kids for allowing them to participate in the creation of the campaign.

“I feel like this is where it starts, it starts at school and kids, I hope ya’ll pass it on to your fellow classmates – don’t throw your trash out, take home with you and put it in the trash,” he told the students.

At the conclusion of the meeting each commissioner picked up several signs so they could install them throughout their districts.