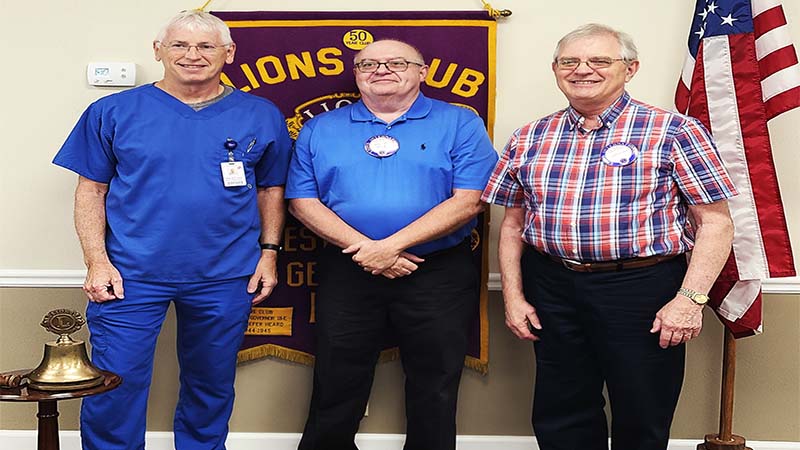 In early January, news started circulating of a virus in China that was sweeping through the city of Wuhan that forced the Chinese government to lock the city down to stop the spread. In January, the first positive case of COVID-19 in the United States was reported in Washington.

For Dr. David Fagan, who was the guest speaker at the West Point Lions Club on Wednesday, the virus truly hit home on March 12, when NBA player Rudy Gobert tested positive for the virus effectively shutting down the NBA.

“It’s hard to believe that 15 months ago that we hadn’t even heard of this thing that has profoundly affected our lives,” Fagan said. “I had my tickets for the SEC basketball tournament, and I was ready to go to Nashville for the tournament and that that got shut down. Before we knew it, our lives were changed forever by the virus.”

While speaking to the Lions Club, Fagan gave an overall COVID-19 update, talked about his history treating the virus and information about vaccines.

Fagan works for EAMC Lanier, but for the past three years, he has worked outside the hospital, meeting patients at his office off Fob James Drive. In April of 2020, Fagan had to fill in for a doctor who was sick.

“It still moves me how that scene was so horrific,” Fagan said. “To walk into an ICU and see everyone looking like it was Mars. Everyone was in full PPE, masks and gowns, going in and trying to care for patients on ventilators with no families around. [Patients and doctors] were trying to communicate with families through iPads. It was the worst thing I’ve experienced in 30 years of medicine.”

Early on, Chambers County was one of the harder-hit counties in the country, as the county had one of the highest infection and death rates per capita.

After the first three months, the virus rate slowed in the United States until a winter surge in late December and early January time frame.

According to Fagan, there were at least 92 covid patients in East Alabama and 15 at Lanier at that time. One of the harder affected areas was the nursing home at Lanier.

Fagan said Wednesday was the first time he had been able to go inside the nursing home to do his rounds since the pandemic started.

In January, Fagan said he was seeing eight or 10 cases of covid just at his office. Now, Fagan said his office hasn’t had a positive case in a couple of weeks.

Though the pandemic has been tough for Fagan, he is optimistic about the end of the pandemic since the vaccines were released.

“I’ve been optimistic for the past few months since we got vaccines out,” Fagan said. “As soon as it was available to me, I kind of ran down to get mine. I am encouraged that our vaccination numbers are going up and our covid numbers are really coming down. The latest I saw 32 percent of Americans are fully vaccinated. Some states are up, I think Maine is up to 45 percent. Here in Alabama, we’re at 24 percent. I don’t understand why we’re so behind in something as important as that.

“I think it was reasonable for people to wait in the initial months and see how it was going to turn out, but now I think it’s a vaccine resistance.”

Fagan believes part of the vaccine resistance reflects how people have perceived the pandemic the entire time.

“I try to accept those things and encourage people that you’re not just doing it for you. You’re doing it for your neighbor, your grandparents, your aunt or uncle. Yes you might not get covid or get sick from it, but you might transmit it to someone else who would get sick,” Fagan said. “I think our rates are going down because our rates of vaccination among our most vulnerable population is really high.”