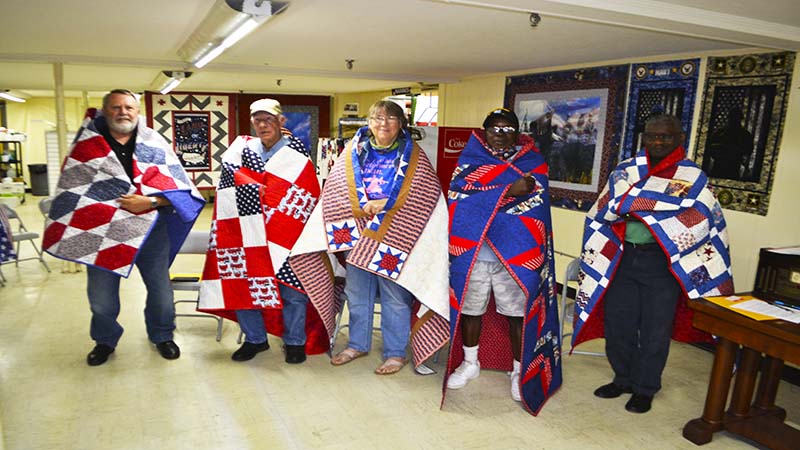 WEST POINT — Two U.S. Army veterans, two from the Air Force and a former Marine were honored Saturday morning with quilt presentations by the Georgia-Alabama State Line Chapter of the Quilts of Valor. The ceremony took place at sewingmachine.com in downtown West Point.

The honorees included Glenn Wilson of Warm Springs, Georgia, who served in the Army from 1973-1994. A Desert Storm veteran, he retired with the rank of major.

Other honorees included Willie Hargrove of Columbus, Georgia, who was in the Army from 1976 to 1998 and served in Operation Desert Storm.

Clarence Barber of Valley was in the U.S. Air Force from 1950 to 1954. At one time he was stationed in Tripoli, Libya.

Teresa Bookwalter of Daviston, Alabama was in the U.S. Air Force from 1985 to 1998. She’s a veteran of Desert Storm and is now an active member of the Georgia-Alabama State Line Chapter of the Quilts of Valor, which meets the first Saturday of every month at sewingmachine.com.

Alton Calhoun of Thomaston, Georgia was a U.S. Marine from 1979 to 2002. He stood at attention on Saturday as the Marine Corps Hymn was played during the introduction. Also in the medley of military songs was “The Caissons Go Rolling Along” for the Army, “Anchors Aweigh” for the Navy, “We’re Always Ready for the Calm” for the U.S. Coast Guard and “Off We Go Into the Wild Blue Yonder” for the Air Force.

“There’s more than $100 in fabric, batting and thread into every quilt we sew,” she said. “Most of it is out of pocket.”

Quilts have been awarded locally to veterans and active duty military personnel for several years now. There were no presentations between March 2020 and February 2021 because of the Covid-19 pandemic.

It took Roberts’ small group some three years to make and award 100 quilts, but as word spread about what they were doing, chapters started organizing all over the U.S. In May 2014, the 100,000th quilt was presented. Since then, the number of presentations in the U.S. has surged past the 260,000 mark.

The local chapter has made a special effort to award quilts to veterans of World War II and Vietnam. Those Americans who came of age during WWII have often been called “the Greatest Generation.” Precious few veterans of that war are still living.

Vietnam was a very divisive period in U.S. history. Some veterans returning home were advised not to wear their uniforms in public to avoid possible harassment from civilians who were opposed to the war and sometimes called U.S. soldiers baby killers and other such insults.

The overwhelming majority of those who served had not committed atrocities while there.

“Many of the soldiers who served in Vietnam were not treated right when they came back home,” Simpson said. “We need to somehow make amends for that. We want to treat you right today.”

The veterans who were recognized Saturday were appreciative.

“Thank you for the hard work you do in making these quilts,” Hargrove said. “We appreciate being recognized for serving our country.”

“I was grateful just to have an opportunity to serve my country,” Calhoun said. “Thank you for thinking about us today.”

“Please help us get the word out about what we are doing,” Simpson said. “Encourage your buddies who are veterans to put in for a quilt. We would like to grow here in West Point. We will welcome anyone who sews and anyone who wants to make a donation.”