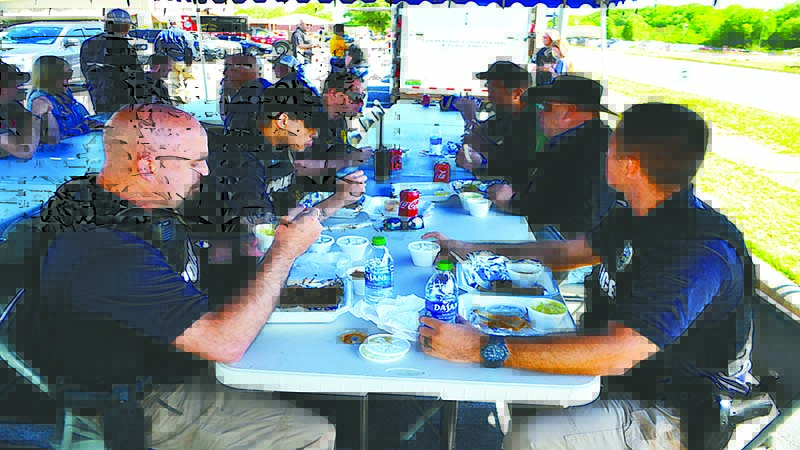 LANETT — First responders throughout Chambers County were treated to a hearty barbecue lunch by the Greater Valley Area Chamber of Commerce this week. On Monday, Executive Director Carrie Royster and her staff were at the First Baptist Church in LaFayette treating the city’s police officers, firefighters and paramedics. Also given a free barbecue lunch were volunteer firefighters throughout the county and linemen for the Tallapoosa River Electric Cooperative (TREC). Many of those guys were in for long nights Wednesday, cleaning up the damage left by a severe storm that rolled through the county. An estimated 120 people were fed at the 11 a.m. to 1 p.m. CDT event. It was catered by Rolling Rackz Barbecue of LaFayette.

From 11 a.m. until 1 p.m. EDT, first responders from Lanett, West Point and Valley were treated to a free barbecue lunch in the parking lot next to El Rio Mexican Restaurant in Lanett. An estimated 180 police officers, firefighters and paramedics took turns eating some tasty barbecue prepared by Pig-Out. Carey Carroll had one of his food trucks on site turning out hot plates for the groups of first responders.

Pig-Out barbecue was served from a restaurant on FOP Road several years ago. The business closed as Carroll dealt with some health problems. He’s doing much better now and will soon open a new barbecue restaurant in the Beauregard community. He has two food trucks catering events like the first responder lunch. Pig Out can be reached at (334) 585-0719.

Each first responder received a plate with barbecue pork with sauces, baked beans, potato salad, bread and a drink.

“Our first responders mean so much to our cities and the entire county,” Royster said. “Treating them to lunch is our way of saying thanks for the great work they do.”