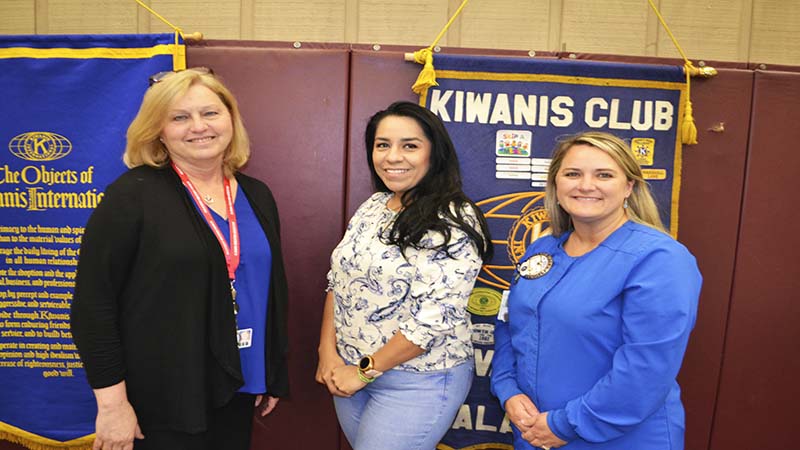 VALLEY — The human resources manager for the John Soules Foods Valley plant was the guest speaker at Wednesday’s noon-hour meeting of the Kiwanis Club of Valley. Janet McMillan has been in the local area since April 30. She currently works out of the Chambers County Development Authority’s former office on Broad Avenue in Lanett. She will relocate to her new office in the Valley plant on July 1.

“John Soules Foods is a family-owned business that’s becoming a big company,” she said. “There were approximately 200 employees with the company when I started working there in 2004. When you include our facility in Gainesville, Georgia, employment is over 800 today.”

That will surge well past 1,000 when the Valley plant goes into production this summer. The projected start-up date is Aug. 15.

McMillan said there’s a great deal of interest in working for the new plant. People can apply by emailing at jsfhiresvalley@jsfoods.com.

“It’s still early,” McMillan said. “I don’t think we will have problems getting employees. I hope not.”

The company is looking for approximately 200 entry-level employees, 60 maintenance people and 30 management people. There should be 300 people working for the company when production starts.

John Soules Foods will be hosting a job fair at Valley Community Center on Wednesday, May 26. Company representatives will be there to meet with people interested in working at the Valley plant.

“We are excited about it,” McMillan said. “We will probably start hiring in mid-July.”

The job fair will be scheduled in a way that’s convenient for job seekers. The first phase will be between 10 a.m. and 3 p.m. There will be a second phase between 5 p.m. and 7 p.m.

Like the JSF plants in Tyler, Texas and in Gainesville, the Valley plant will run two shifts. First shift workers will arrive at 7 a.m. and second shift workers at 4 p.m. Third shift workers will be working for a private contractor and will be doing clean-up work. During the late-night hours, the plant will be having large amounts of wastewater releases. This is designed for the plant to be among the cleanest meat processing plants in the country.

McMillan said that no live chickens will be coming to the plant. All slaughtering takes place at another location. What will be taking place in Valley is cooking, seasoning and placing ready-to-eat meat in eight-ounce packages. Some of the packages will include the John Soules Foods brand name and will be sold in stores like Walmart and Sam’s. Some of it will be going out to restaurants such as Subway, Quizno’s, Burger King, Jack in the Box and Arby’s. “Everything we make is pre-packaged,” McMillan said. “We have our label on some of what will go out, and labels for restaurants on other items. Walmart and Sam’s are two of our biggest customers.”

The Tyler plant specializes in chicken and beef fajitas. It’s the reason John Soules Foods is the nation’s largest producer of those products. The Gainesville plant does shredded patties and chicken nuggets. Current plans are for the Valley plant to expand on what’s being done at the plants in Tyler and Gainesville.

The company will offer benefits such as health insurance, an opportunity to have a 401(k) and there will be an in-house medical facility for the workers.

She admits to having had some reservations about taking a position in Valley. It was a major move for someone who had been in Texas for so long, but she’s glad she made it. It’s a career advancement for her, and she really likes being in Alabama.

“The people have been so nice,” she said. “I am really enjoying being here.”