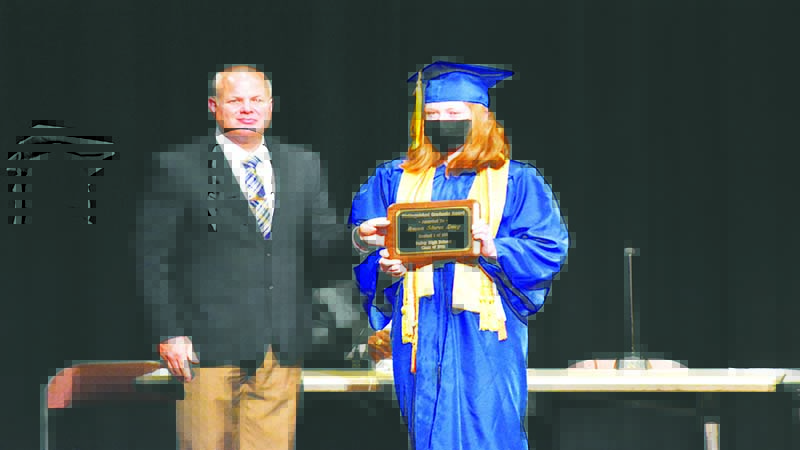 Being first in her class is a goal Valley High School senior Storm Lacy has been working toward her entire time in high school. Growing up, she was always the top of her class, but once she moved to W.F. Burns Middle School, being the top student wasn’t as easy, as she was in a three-way battle for the top spot.

Throughout her middle school career, she was consistently the No. 2 student. Once she got to high school, her goal was to finish as the No. 1 student in her class, something she officially accomplished in May.

“In freshman year, I fully set out to be No. 1, because I wanted that title again,” Lacy said. “I just stayed No. 1 after freshman year and tried really hard to maintain that. It was just very relieving and built up to this moment.”

Lacy said her favorite part about her time as a Ram has been the culture mix.

“In such a small town, you’d expect for it [the culture] to be all the same, but it’s surprisingly diverse. Figuring that out has been the most interesting part of [her high school career],” Lacy said. “The diversity, because of it, I’ve been able to find people that I can relate to. A very cliche small-town struggle is not being able to find people that you can relate to. My friend group is so different. I have people that have experienced so many things in my friend group. It provides a very interesting perspective, and I think that has helped me to be so good at learning and retaining information because I’ve had to adapt to know so many different people and getting close to people that I’m very unrelated to.”

During high school, Lacy has participated in Valley athletics, taking part in the volleyball and soccer teams.

She also participated in the Valley theater program, the Beta Club and Mu Alpha Theta, a math honor society.

Lacy graduates a few credit hours away from being a sophomore in college, thanks to her dual enrollment classes.

“I’ve spent so much of my life crunching down and doing things really fast, and I think it’s going to give me the ability to keep pushing forward but give time for myself as well,” Lacy said. “Because of dual enrollment, I’m only a class or two away from being a sophomore in college. It’s going to help me move along quickly, especially because I want to be a professor.”

Lacy will attend Auburn University with plans to major in English and publishing. She will pursue a doctoral degree after graduating from her undergraduate in an effort to become an English professor.

“‘I’ve always enjoyed education and the learning environment, but I really like abstract and intellectual thought, as compared to working with kids,” Lacy said. “I like to see young adults and flourishing minds instead of the elementary education levels of it.”