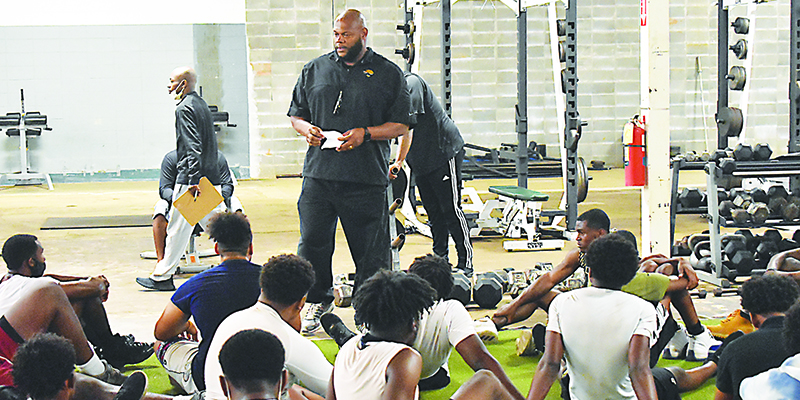 Since falling in the third round of the AHSAA 2A playoffs, the Lanett football team has been ready for the start of the 2021 season. Tuesday was the first day, as the Panthers began spring camp.

“It’s very exciting. All the adversity and things that we have been through during this pandemic, just trying to get back to a little bit of normalcy, it means a lot,” head coach Clifford Story said. “I was really excited, the coaches were excited and the kids were even excited to be back and doing what we do.”

Lanett’s adversity has been well documented since the end of the 2020 season, as the school had a fire that took out Lanett’s field house and weight room, which destroyed most of its equipment including pads, helmets, uniforms and championship memorabilia.

Though it hasn’t been able to use its own facilities, Lanett has been able to work at Valley Baptist Church, where it was on Tuesday due to the heavy rain.

“You have some guys that played a lot last year that were much younger, and they learned it,” Story said. “I was watching them today during our install walk-through stuff. I could see them telling people where to go without having to ask a lot of questions, and that means a lot. The more experience you have the better off you are down the road. Moving forward, we have a good, young group coming behind them. We’re going to try to plug them in, make sure they’re fundamentally sound, have good technique, have fun and compete.”

On Tuesday, the high school team went through a walk-through in the Valley Baptist parking lot before heading inside to continue their weight program. Most of the older players answered any questions for younger players during that time.

“It means a lot because when you have guys with leadership and know how to do things, they can help bring the younger guys along,” Story said. “We have a really good group, a really large senior class right now. We have 21 seniors, so that is going to be really big for us. All these guys have played at some point since they’ve been here. I’m really excited for this team. I think we have a chance to be really special. Like I say every year, we want to be around when the grass is brown. If we can just keep them focused and they can stay focused with the academics, we’re going to have a chance to be in Birmingham.”