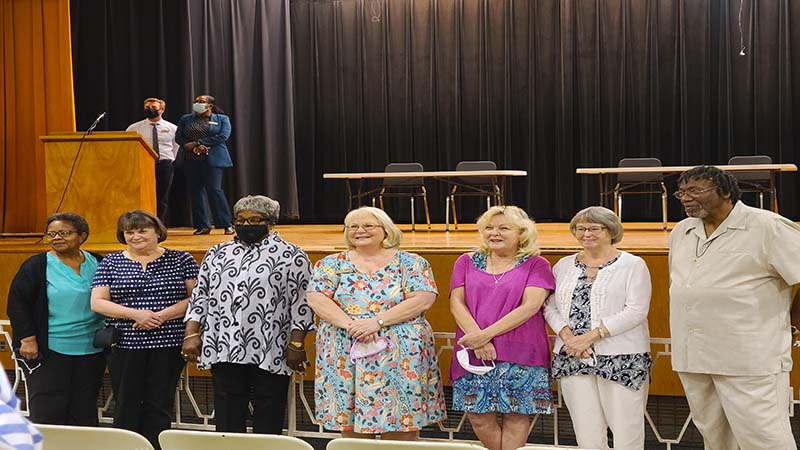 At its May regularly called meeting, the Lanett City School Board recognized staff that will be retiring at the end of the school year and the top-10 students from its 2021 senior class that will graduate on May 28.

LCS will have seven total retirements.

Paula Harlin, who is currently an instructional assistant at W.O. Lance Elementary School, is retiring after 25 years.

“She is dedicated. Mrs. Harlin does a great job with our buses. She works with all students very well and she is eager to help in any capacity that she can,” W.O. Lance principal Donna Bell said. “Even though I’ve only been with Mrs. Harlin since January of 2021, she has been a blessing to me.”

Tawana Henson, who works as the W.O. Lance art teacher, is retiring after 11 years.

“When I arrived in January, I asked Mrs. Henson to get her cart and her art supplies and hit the road. She traveled from classroom to classroom,” Bell said. “She was able to see more students this way, but she was not able to do some of the projects that she likes to do. Mr.s Henson has been a true champion and has assisted me in any way that I need.”

Melissa Smith, who is a first-grade teacher, is retiring after 31 years, all of which were part of the Lanett City Schools system.

“I could never find her not teaching,” Bell said. “Every time I walked down the hallway, she is in front of the students teaching her heart out. She’s just wonderful. She sends me emails here and there saying thank you for this or that. She just shows that she is an overall wonderful person.”

The lone retiree at Lanett High School is Abigail Bonner, who has worked at the high school as an instructional assistant for the past 16 years.

“I’ve had the pleasure of working alongside her first as a teacher in the classroom and most recently as her administrator,” said LHS Principal Bryant Lumpkin. “I can say with confidence that she will be missed by everyone, staff and students alike.”

Kathy Hughey has worked in the Lanett child nutrition program for 26 years. For the past 14 years, she has served as the lunchroom manager at Lanett Junior/High School.

“In her time here, she’s seen many changes in how the program is operated. The introduction of menu and nutrient analysis began under her tenure here,” CNP Director Julianne Ponder said. “Of course, we could never have predicted the challenges that were brought along by the pandemic, but she was able to shift and adjust the program to fit those needs.”

The Lanett Transportation Department will have two bus drivers retire at the end of the school year. L.Z. Johnson, who was one of the school district’s original bus drivers, is retiring after 16 years.

“He’s very dependable,” LHS head of transportation Clifford Story said. “I’m really going to hate to see him go. When you have really dependable people where you don’t have to worry about them showing up and doing their job, it means a whole lot.”

Ozella Roberts has spent the past 14 years as a bus driver in the LCS, specifically working as a special education bus driver.

“No one is neater, cleaner and I’m telling you, this lady’s bus still looks the way it did when we put it in the parking lot after we purchased it,” Story said. “She is going to speak her mind, she’s going to tell you what she’s not going to do, but when you get along with her, she’s going to do exactly what you need her to do.”

The school board announced its new officers for the next school year as well. Gwen Harris-Brooks was re-elected as the board’s president.

“I would like to say thank you for entrusting me to help lead Lanett City Schools through what we do,” Harris-Brooks said. “I can’t do it by myself. Behind every great leader, there are great followers. Thank you for the trust that you have put in me.”

Tony Edmondson was re-elected as the vice president of the board.

LCS also approved the entire list of Art Education textbooks that was approved by the Alabama Department of Education. It similarly did this for the math textbook list in case LCS wants to add or change courses.

The board approved a bid of $52,999 from Presco for lunchroom serving equipment for the Lanett Junior High and Lanett High School gym.

Lanett will hold its high school graduation ceremony on May 28.