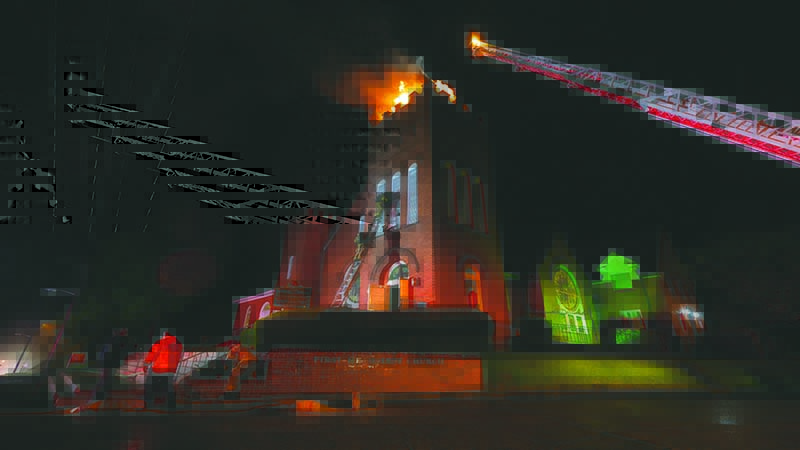 Claps of thunder signaled a storm was coming to Alexander City Tuesday night. But the light in the sky after the storm passed was the flames from the bell tower of the First United Methodist Church.

The church was a gathering place for its congregation Tuesday and prayers were said but not as part of a regular service.

Church members were praying for firefighters as they fought a blaze breaking through the roof of the bell tower. Lead pastor Barry Dunn found it hard to believe the church standing at the corner of Green and Semmes streets was ablaze.

Dunn was joined by church members, trustees and executive pastor Mike Densmore in disbelief. Recent work on the church should have prevented the blaze.

“We recently renovated this side of the sanctuary and the bell tower,” Dunn said. “The roof was pulled off, the decking was replaced and the holes patched.”

Denismore said the renovations were finished more than a year ago.

“We rewired everything,” Densmore said. “We redid the sanctuary and the bell tower. The bell tower had a metal structure at the top holding up the roof.”

Firefighters used fire axes to get in the bottom of the bell tower while firefighters struggled to get enough water from the fire hydrant at its base. Kellyton and Our Town volunteer fire departments brought in tankers to help shuttle water to a drop tank to help feed the ladder truck of the Alexander City Fire Department.

Claps of thunder likely signaled other damage — the bell itself.

“It was the real bell and it’s already fallen,” Dunn said.

Denismore said church officials were not sure if the bell had fallen to the ground floor or to one of the decks in the bell tower.

“We were lucky someone wasn’t under it when it fell,” Densmore said.

Densmore said the entire facility was reroofed when renovations were done.

FUMC Alexander City formed in 1872 and its congregation met closer to downtown. The building was destroyed by fire. The congregation met for a while at First Baptist Church and built the current structure in 1909.

FUMC planted the Trinity Church and took it back under its umbrella. It also has The Arbor across the street. The future of the historic church, mainly its bell tower and sanctuary, is up in the air now.

“I can’t see us being in the sanctuary soon,” Dunn said. “I imagine this roof is going to be compromised. I can’t imagine we will be in this facility anytime soon. We will have to assess all this.”

The water used to extinguish the blaze likely damaged the church’s organ and its daycare, Jacob’s Ladder. Kim McAlister is its director.

“Kim is trying to get in to see if the downstairs is flooded,” Densmore said. “All of the water is sloping that way. It is going to be a mess.”

All of the damage can be attributed to the Tuesday night storm.

“According to the fire chief, it took a direct lightning strike,” Densmore said.